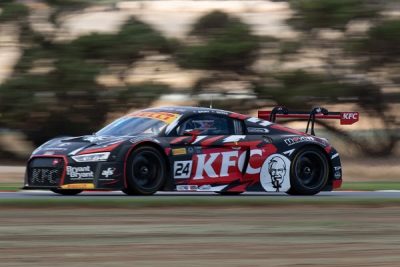 Tony Bates is looking forward to racing at one of his strongest circuits, Sandown Raceway, for Round 3 of the Australian GT Championship in his KFC/Moveitnet/C-Tech Laser/B&B/Local Roadways Audi R8 this weekend.

The multi-purpose car and horse racing facility has been a happy hunting ground for Bates – he has won a total of six Carrera Cup races at the venue (including a clean sweep in 2015), along with two Commodore Cup races.

“I’m excited to be back at Sandown, it’s always been a circuit where I’ve gone well and I haven’t raced there since 2016,” Bates said.

“It’s a track with predominantly slow corners leading onto long straights, but there’s also a high-speed section from the end of the back straight to Dandenong Road Corner, which will really suit the aerodynamic and corner speed capabilities of the Audi.”

Weather is expected to influence the event, with heavy rain forecast for at least part of the weekend. Bates is not fazed by the potentially challenging conditions.

“I’ve always enjoyed racing in the wet, and I’m interested to see how the Audi handles in a low-grip situation,” he said.

“These GT cars have driver aids like traction control, which can be adjusted according to the conditions.”

A total of 29 cars are entered for the meeting, and Bates said traffic management will be a defining factor.

“We’re in the Championship Class, and we’ll be sharing the track with the slower Trophy and GT4 cars – there’s quite a large disparity in speed,” he said.

“Sandown is one of the easier tracks to navigate through traffic but it’s still going to be important not to lose time behind slower cars.”

After sharing the driving with Daniel Gaunt for the last two events, Bates will fly solo this weekend for the three 40-minute races.