Bates and MSM Fastest in Am Practice at Bathurst 12 Hour

Bates and MSM Fastest in Am Practice at Bathurst 12 Hour 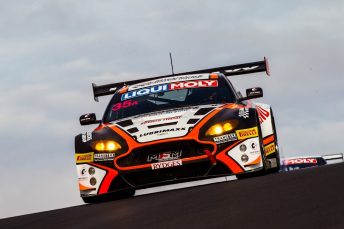 Tony Bates in action at Bathurst

MEDIA RELEASE: Tony Bates and the Miedecke Stone Motorsport team have finished a productive day of practice at the Liqui Moly Bathurst 12 Hour in fine style, setting the fastest time in the Am Class and 10th-fastest lap outright in the fourth practice session aboard the Infant’s Friend/Moveitnet/Lubrimaxx Aston Martin V12 Vantage GT3.

After some tweaks in between the first three practice sessions, Bates along with his co-drivers George Miedecke and Ashley Walsh, reported significant improvements in the Aston Martin’s balance during the last session.

“During my last run of the day, the car was sensational,” Bates said.

“I was able to push with confidence across the top of the Mountain, and it was responding beautifully.

“The team did an excellent job of listening to our feedback and making adjustments accordingly; George, Ash and I were all working very well together and providing the same feedback about how the car was behaving.

“In an endurance event like this one, it’s important to have a program which you can work through, and we certainly did that today.

“I’m looking forward to seeing how much outright speed the car has in qualifying tomorrow, and we are well and truly on the right path to having a strong package for Sunday’s marathon,” Bates concluded.

Tomorrow’s action kicks off at 8:00am with a fifth practice session, Qualifying will be held at 10:40am followed by the Top 10 Shootout at 3:40pm.

Practice and qualifying will be live streamed on www.bathurst12hour.com.au and the Shootout will be shown live on 7MATE.