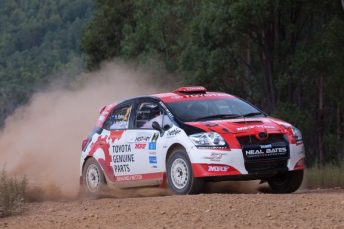 Toyota Genuine Parts driver Harry Bates will look to fight back in his ‘home’ round of the Australian Rally Championship (ARC) in the national capital next month.

Bates won the opening round in Victoria, but two tyre punctures and mechanical problems in Sunday’s Heat 2 of the Forest Rally in Western Australia have seen the Corolla driver slip from first to third on points.

Saturday’s Heat 1 in the forests near Busselton was hailed as a great day’s rallying; a see-sawing encounter with four crews winning stages and the rally lead changing five times.

Harry is the son of Neal Bates and Molly is the daughter of Coral Taylor – Toyota’s four-time national rally champion pair.

Harry Bates won two stages in Heat 1 and two in succession in Heat 2 to close to within six seconds of Taylor before problems occurred.

He rejoined the rally before the final control to secure vital points for seventh place.

“Saturday was a good; a really tight battle all day even though we struggled on a few stages,” Bates said.

“It was great to see my good friend Molly Taylor get a Heat win.

“During the first stage on Sunday morning we had a puncture and lost a bit of time.

“We hoped to make up time, but we then had a second puncture and lost one minute and 20 seconds. We were still trying to recover as much time as we could, but the car came to a halt on Stage 17,” Bates said.

“The Forest Rally is known for ‘ball-bearing’ gravel and that’s an extra factor when you’re the first car on it – in effect you’re sweeping the road.

“As title leaders coming here we knew we would be car 1 and I really enjoyed the challenge.”