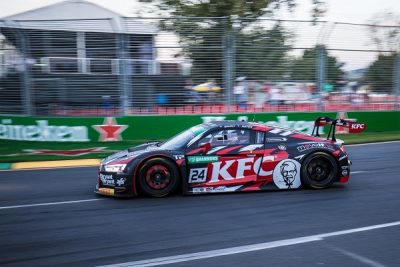 Tony Bates has completed a solid opening Australian GT Championship round for the KFC/Moveitnet/C-Tech Laser/B&B/Local Roadways Audi R8 at the Australian Grand Prix, finishing seventh in the weekend’s fourth and final race.

Bates’ measured performance came after his co-driver Daniel Gaunt worked his way from 26th on the grid to 11th in Saturday’s third race, which was affected by wet weather conditions.

“Overall, it was a solid and consistent weekend, and we achieved our objective of scoring a healthy points haul,” Bates said.

“Daniel was very unlucky at the start of Race 1 to have contact with another competitor and suffer a cut tyre, and he did a tremendous job of minimising the points loss in Race 3 with an exemplary drive in difficult conditions.

“The highlight of the weekend for me was Race 2 – the car was excellent, and I was able to stay with the front-running pack for the entire race.

“In Race 4, I felt the car wasn’t quite in the window but I was still able to record competitive times.

“Overall, it was a weekend where Daniel and I gathered a lot of valuable information which will serve us well for the rest of the season, especially the endurance events where we’ll be sharing the car,” Bates concluded.

The next round of the Australian GT Championship is an endurance round at the brand-new Tailem Bend circuit, 14-15 April.