Bates aims for victory at his home rally

Bates aims for victory at his home rally 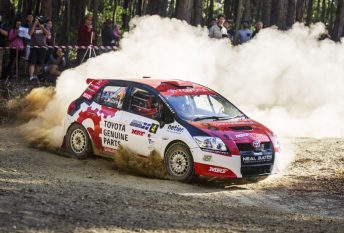 Rising rally star Harry Bates is aiming to accelerate his 2017 Australian Rally Championship (ARC) campaign at his ‘home’ rally around Canberra this weekend.

Bates is a leading title contender in his Toyota Genuine Parts Corolla S2000, holding third place in the championship ahead of this weekend’s National Capital Rally.

He and co-driver John McCarthy topped the time sheets in this year’s first round in Victoria in March, making Bates the youngest driver ever to win an ARC round.

A tough second-round in WA last month, including two tyre punctures and mechanical problems, has the duo determined to return to the top step of the podium this weekend.

Bates has fond memories of his home-town rally – taking a podium finish in his first outing at the top level in 2015 – even though he succumbed to an unlucky rollover last year.

“We’re looking forward to another tight contest, so it will be important to have a clean run here – just as we did two years ago,” Bates said.

“I have grown up spectating on these roads so I feel at home here; but, as a driver, the roads are no more and no less familiar to me than any other competitor,” he said.

The Canberra event will be something of a family affair with Bates competing for the first time in the ARC against both his brother Lewis and his father Neal, a four-time ARC champion.

Lewis will return to the fray in a leased Toyota Corolla after his own car was tragically destroyed by fire at the Eureka Rally in Ballarat in March.

Neal and co-driver Coral Taylor – both inducted this year into the Australian Motor Sport Hall of Fame – will compete with their 3SGE-powered RA40 Toyota Celica in the ARC classic section.

The National Capital Rally covers a huge area to the east and west of the city, with competitive stages including the infamous “Kowen Jump” where committed competitors regularly take flight at high speed.