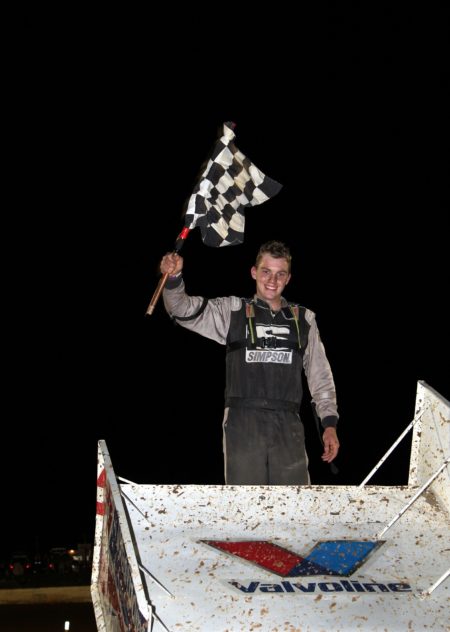 In what is currently his third season with the Colin Sands-owned Westpoint Racing team, the 23-year-old racer on Saturday night was able to better his previous best Victorian Title attempts of two minor podium finishes (third) with what was an impressive victory.

Heading into the Victorian Title deciding feature race as the fourth highest point scorer following a fourth and a win in his two heat races, Bastian felt confident of a front-running performance throughout the 35-lap event, and that’s exactly what he did.

From the outset of the feature race, Bastian made his intentions clear within the opening laps by moving into third despite his car’s setup being quite tight. He then chased down the Shane Steenholdt for second and on lap 15 he was able to execute a successful pass on him for the position. As the feature race, which only saw one stoppage in the early laps, wore on, Bastian set his sights on leader Sam Wren as they worked their way through lapped traffic. With Bastian’s car setup becoming better and better and also finding a comfortable line at the top of the track, he was able to close in on Wren and then on lap 20 pass him for the lead. For the remaining 15 laps, Bastian controlled the pace and went on to score a comfortable win.

For Bastian, winning the Victorian Title after only four attempts was very satisfying to say the very least.

“To win a Victorian Title is a dream come true and to do it the way I did made it all the more satisfying,” said the Vic # 55 Westpoint supported Maxim driver.

“I’ve always been pretty fast around Redline Raceway and I felt quite confident of being able to do well heading into the Victorian Title. I was fast from the beginning of the night through to the end, which is most important, and I owe a lot of this down to my team’s efforts throughout the night with the car’s setup.

“I can’t thank the entire Westpoint Racing team enough for all of their ongoing efforts, especially my team owner Colin Sands and my team-mate Adam Greenwood, and to take out a Victorian Title is the perfect way to thank them.”

Looking ahead to his 2021-22 season campaign, Bastian, along with the rest of the Westpoint Racing team, is excited about getting a full schedule in, especially now that he is carrying Victoria # 1.

Bastian is proudly supported by the following 2020-21 season sponsors:

Bastian would also like to give special thanks to his dad (David), Colin Sands, Ethan, Adam, Charlie and Anthony.

To find out more about Bastian and the Westpoint Racing team, LIKE them on Facebook by searching Alistair Bastian Racing.