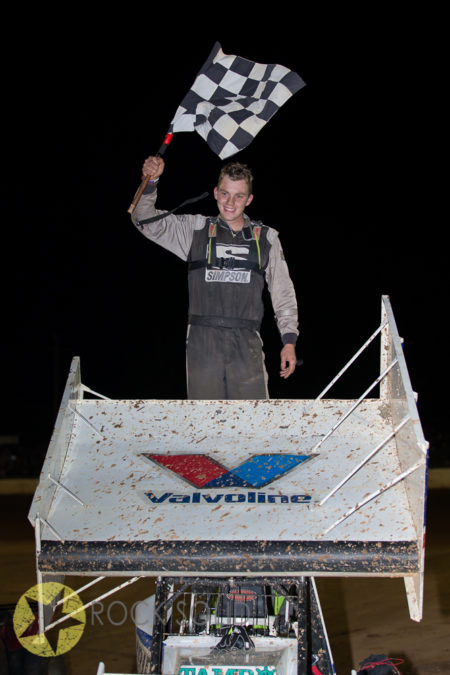 Alistair Bastian is the new Victorian Speedway Council Sprintcar champion and David Barrie is now the Street Stock King of the Mount after a classic night of racing at the greater Ballarat region speedway, enjoyed by around 1500 fans live at the venue.

The Sprintcars state title attracted over twenty cars with the best available in the category all on hand. Shane Steenholdt down from Bairnsdale won the first heat scorching around with a one lap and ten lap track record in the race. David McKay also set a fast pace in the second heat that he won, which if the race had of occurred three minutes earlier, would have been records for him. He won by .075 of a second at the finish line.

In a thirty-five-lap final Wren led the first twenty laps before Bastian used the high side of the track to make a race winning passing move and going on to win by just over 2.5 seconds from Wren, Steenholdt, Shaun Lyness, and McKay.

With the drop of the green flag Ahearn led the first portion of the race with Blomeley and Nelson the chasers. Blomeley was the first big gun to pull infield with a mechanical defect and Nelson Degoldi, Mick Clark and Marino kept the pace up behind Ahearn.

Nelson took the lead on lap six and by then Clark had moved into third place. On lap thirty-three making their way through traffic the right rear end of the Ahearn car connected with a competitor he was trying to pass and that caused enough damage to put him and his car infield. Nelson still led Degoldi, David Barrie, Dean Jenkins, and Dale Blomeley.

A stoppage for Dale Blomeley brought the field to a caution period as fire crews sorted out the concern and Nelson had a green, white, chequer flag scenario in which to win the race. Barrie and Jenkins were second and third and green dropped and on the outside of turn four Barrie got a good run to the white flag taking the race lead and winning by just .619 of a second delighting the turn two faithful at Redline.

In his defeat Nelson was gracious towards the winner Barrie and still pleased for Barrie and his own result, Barrie was humbled to be first in the King of the Mount in his winner’s speech and delighted to win. “Thank you to Redline Raceway’s officials and volunteers for the work they do to give us a racetrack and race meeting. Well done to the other podium places and bad luck to Matt (Nelson) who deserved to win after leading for so long. Thanks to my friends, family, and partner for your support, I never thought I would be a winner in a big race like this, but here I am, it is a great feeling. Shared Barrie.

The AMCA Nationals also competed with Dean Heseltine and Tim Reidy resuming their own personal King of Redline battle and Heseltine coming out on top. Neale Peachey set an eight-lap record for the class in qualifying and in the feature event over fifteen laps Heseltine led from lap eight after Paul Sullivan suffered mechanical issues and parked infield. Heseltine won ahead of Reidy by less than a second with Peachey in third, then Frank Thierry and Hugene Charvat. Peachey Darren Bloom and Reidy all won qualifiers prior to the final.

Redline Raceway returns on May 15th for the final event of the season with the Standard Saloon Chivers Memorial, Compact Speedcars, Unlimited Sedans and the Piston Cup for Junior Sedans.