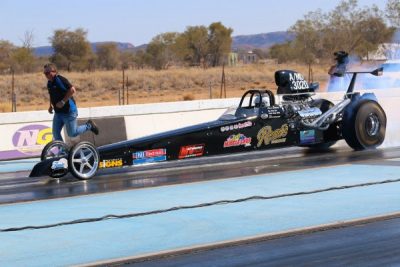 Modified racer Simon Barlow ensured his Desert Nationals trip was a success recently, resetting both the ET and MPH markers of the national A/MD record on his way to a finals appearance at the Alice Springs Inland Dragway event.

The South Australian had earlier taken out the Top Qualifier’s Medallion – thanks to TileCo-TheShowerPeople and KC Tools – for the bracket during what was round two of the 18/19 Summit Racing Equipment Sportsman Series.

Thanks to Barlow’s efforts, the national A/MD ET and MPH records now stand at 6.871s and 197.87mph respectively.

“We are always happy to reset records, even though we don’t actively chase them,” the 49 year old truck driver from Adelaide said.

“The car was running really well in Alice Springs and the numbers we ran were a little better than expected for the conditions, considering we were running at effectively 3500 foot of air which isn’t the best for making power. I was expecting low 6.90s, so to pull out a 6.87 second pass was rather pleasing.

“The last time we raced in Alice Springs was in 2015 when we were lucky enough to come away with a win. We were hoping for a repeat and we gave it our best shot but could only manage to snare the runner up result. Our congratulations go to Adam Mundy in his dragster on his first Summit Racing Equipment Sportsman Series win.

“All in all it was a great event – the Alice Springs track is a great track to race at, the club do a great job along with the volunteers. All of the team at Alice Springs really turned on a brilliant event.”

Barlow now turns his attentions to round three of the 18/19 Summit Racing Equipment Sportsman Series – the Sunset Strip Nationals – which will be held at Mildura’s Sunset Strip across September 22-23.

“Last year at Mildura’s Sunset Strip Nationals we broke both ends of the eighth-mile A/MD national record and since then we have learnt a lot more about this engine package,” said Barlow, who thanks Phil and Mick from Reads Transport, Lawrence and Hanson Gawler, Just Muscle Cars, MV Automatics, Wades Automotive Refinishing, his long-term crew and his partner Sonia for their support as well as Joe Jolly from Sunset Performance Engines.

“This Sunset Performance 632 is making a lot of power and when combined with a light-weight dragster it can be tricky to get the power down. With a bit more finessing I think we might give last year’s record a nudge.

“Most importantly though we will be focusing on trying to get as many event points as possible – when you are chasing the Summit Racing Equipment Sportsman Series championship, that is what you have to focus on, getting as many round wins and event wins as possible.”

For more information on round three of the 18/19 Summit Racing Equipment Sportsman Series, visit www.andra.com.au or www.sunsetstrip.org.au