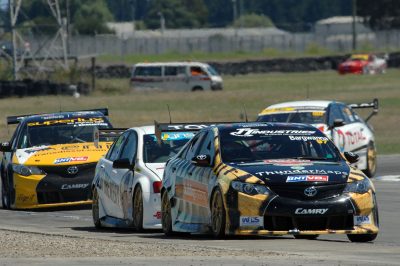 BNT V8 Championship contender Jason Bargwanna says the title is far from over as the sixth and final round will get underway at Hampton Downs, March 10-11.

The former two time V8 champion and winner of the 2000 Bathurst 1000, is aiming for his third BNT V8 title and will go head to head with teammate Andre Heimgartner.

Bargwanna sits in second place in the point’s standings, just 69 points behind Heimgartner. Still a mathematical chance of clinching the title and spoiling the Toyota party is Nick Ross in his Nissan Altima. The Cambridge V8 driver sits third in points, a further 45 behind Bargwanna.

Bargwanna is rueing a costly DNF at Ruapuna’s round three where he had a rare DNF after a tangle on track with fellow Australian Jack Smith, Bargwanna’s race ending in the sand trap.

“From a championship point of view there have been a couple of dramas since after Xmas that have really killed us in the points, which haven’t been our fault, but that’s the way it goes,” says Bargwanna.

“That one DNF could cost us at the end.”

With 225 points still up for grabs across the three races at Hampton Downs, Bargwanna is mindful that anything can happen and the battle for the #1 on the door is far from over.

“The way the championship is at the moment with a slim points gap between Andre and I, anything can happen. I’ve gone into the final round of a championship before with a massive points lead, then having two engine failures and Nick Ross went through to win the title.

“I don’t know what’s going to happen at Hampton Downs, but my job is to go there, get two pole positions and win three races, if we do that, the rest will take care of itself.”

“I know Andre is going to have the same approach.”

The North Waikato circuit has been a happy hunting ground for Bargwanna in the past, taking a win there last season.

“We’ve always had success there, I won a race there last year, it’s a circuit I enjoy and it suits the Toyota Camry, but Andre is going to have the same package. Right throughout the course of the year there hasn’t been more than a tenth of a second between us. Anything can happen.”