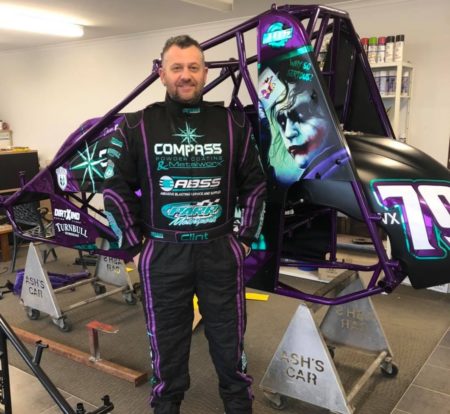 Despite the delayed start to the 2020-21 season, Clint Baker isn’t letting it deter his enthusiasm for his move into the Wingless Sprint class.

After two seasons in the Limited Sportsman class, which was highlighted by a minor podium finish in his dad Kevin’s memorial event – the Kevin Baker Challenge – at Horsham’s Blue Ribbon Raceway, Baker made the decision to branch out and join one of the country’s most competitive classes in Wingless Sprints.

“It’s certainly been a very long off season, but I can’t wait to get out there in the Wingless Sprints,” expressed the Horsham, Victoria-based racer.

“Between my home state of Victoria and South Australia, there is plenty of racing on offer, and that, aside from the class being so competitive around the country, was one of the class’s main attractions.”

Baker continued on by saying that he is hopeful that his previous Limited Sportsman experience is going to aid his move into the Wingless Sprint class.

“When it comes to my goals in Wingless Sprints for my first season, I’m just hoping to learn as much as I can and eventually work my way further up the field as the season goes.”

For his debut season in Wingless Sprints, Baker’s VX # 79 Triple X car is well backed by a list of valued sponsors, which are headed by Abrasive Blasting Service & Supplies (ABSS) and Parr Motorsports.

“I can’t thank all of my sponsors of my car enough and there is no doubt that without their support I just wouldn’t be able to go racing,” added Baker.

The long-term goals for Baker are to run the next few seasons in Wingless Sprints and then hopefully he can down the track step into the VSC Sprintcar class.

The first 2020-21 season outing for Baker is going to be hitting the track on the Saturday night of November 7 at Blue Ribbon Raceway.

Baker has a full range of merchandise available, which can be viewed by visiting www.highline-racewear.myshopify.com/collections/compass-motorsport-clint-baker

To find out more about Baker and his team, LIKE them on Facebook by searching Compass Motorsports.