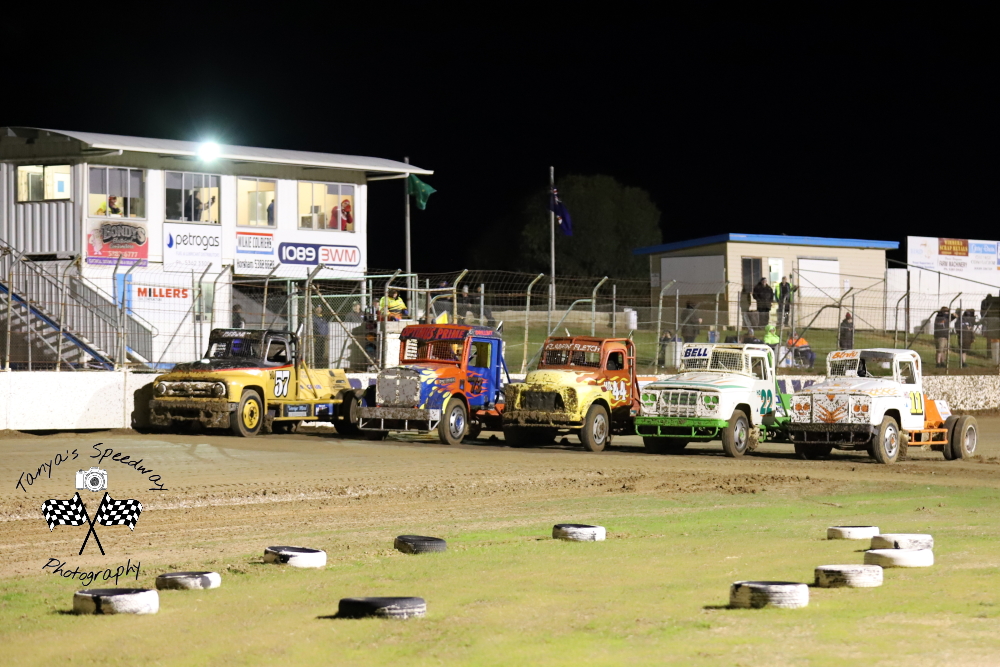 Blue Ribbon Raceway’s annual Robin Thomas Memorial and Kev Baker Challenge events have been run and won this past weekend with Luke James and Jock Baker winning the main events, the Limited Sportsman were outstanding and the support class racing also provided fan’s with a terrific nights viewing across all classes. Winners included John Egan in Wingless Sprints and Dehne Sparrow in Productions

Limited Sportsman has featured in one of the co-main events with the Kev Baker Challenge for the class where the top qualifiers would have to start at the rear of the feature field and work their way through to the front in the final. Andrew Wilson from the Hamilton club won the first of six heat races defeating his stepson Dylan Anton. Troy Curran won the second heat race that had numerous leaders and positional changes through the ten laps. Bayley Wilson, Travis Matthews, and then Curran were the leaders whilst Mal Siely was the fastest and finished back in fourth.

Siely then won the third heat after taking the lead on lap five and was the first racer to set a lap under twenty seconds on his way to a three-second win. Anton then won the fourth heat race ahead of the number one driver of the class Jock Baker by just .279 of a second. Baker chased hard and clocked the fastest lap of the qualifying stage of the night. Andrew Wilson won a second time in heat five by a massive ten seconds before Baker won the last heat of the night in front of Anton.

With top points to the rear of the field, Anton as top qualifier started from eighth with Andrew Wilson seventh, then Curran, Baker, Siely, Bowen Donkers ahead of them and Bayley Wilson from outside pole and then Rod Hetherington starting from the pole position.

Bayley Wilson led lap one of the race with Hetherington, Siely, Baker and Donkers the top five. With spots behind Wilson, changing at a frenetic pace he maintained the front spot through lap five with Baker in second ahead of Siely, Hetherington and Andrew Wilson. Five laps later Bayley Wilson doing an outstanding job still led from Baker, Siely, Anton and Andrew Wilson.

Baker took the lead of the race on lap eleven with Bayley Wilson ahead of his brother Anton and followed by Siely and Andrew Wilson on lap fifteen. By lap twenty Anton had moved head of his brother Bayley Wilson into second and Siely had dropped to fifth. At lap twenty-five, the chequered flag waved and Baker had taken the win from the top qualifier Anton who moved from eighth to finish second with the top lap time of 19.062 with a winning margin between the two of just .483 of a second. Bayley Wilson finished third, Andrew Wilson fourth and Siely in fifth spot.

In the annual V8 Trucks Robin Thomas Memorial, Luke James zipped around with laps under twenty-three seconds most of the night and one the first heat race by over five seconds from Tim Driller. In the second heat, Fletcher Mills lead most of the race until James took the lead, however the Chief Steward was not completely happy with the move and penalised James back two spots at the end of the race. Mills took the win from Driller. In the final James, lead every lap to go on to take the win in the Robin Thomas Memorial from Mills, Driller, Wes Bell and Jaryd Carman.

Wingless Sprints were a welcome addition to the schedule and Mark Walsh set about getting around Blue Ribbon Raceway with the fastest lap time of 16.346 ahead of John Egan from New South Wales who set a 16.464 lap time. In the four heat races Steven Hateley a local Horsham man won the first heat race by just .339 of a second from Egan in a close finish, Hateley had led all laps. James Rodda from South Australia also led every lap of the next heat and won by less than a second also. Egan had a big win in the third heat race and another Horsham local Jeremy Beddison won the final qualifier before the final.

In the main event, for Wingless Sprints Beddison began from pole position with Egan alongside however it was Egan who would lead the field past the flagman on lap one. At the five-lap mark Egan led, Beddison, Hateley, Will Scott and Walsh. Five laps’ later things were almost the same with Scott passing Hateley for the third spot the only change. Walsh began a charge to the podium in the next five laps moving to second behind Egan. At the chequered flag, the New South Wales visitor Egan took victory from Walsh, Beddison, Scott and Hateley.

Production Sedan racing seen local Shaun Queale who this season returned to racing hold out former Australia number two ranked racer Dehne Sparrow early in heat one before the Hamilton racer took the lead and the win. Sparrow won the second heat race also from Queale. In the final Queale then chased Sparrow for many of the early laps of the final until Graham Gerlach passed him. Sparrow took the win from Gerlach, Queale, Heath Riley and Dean Hughes.