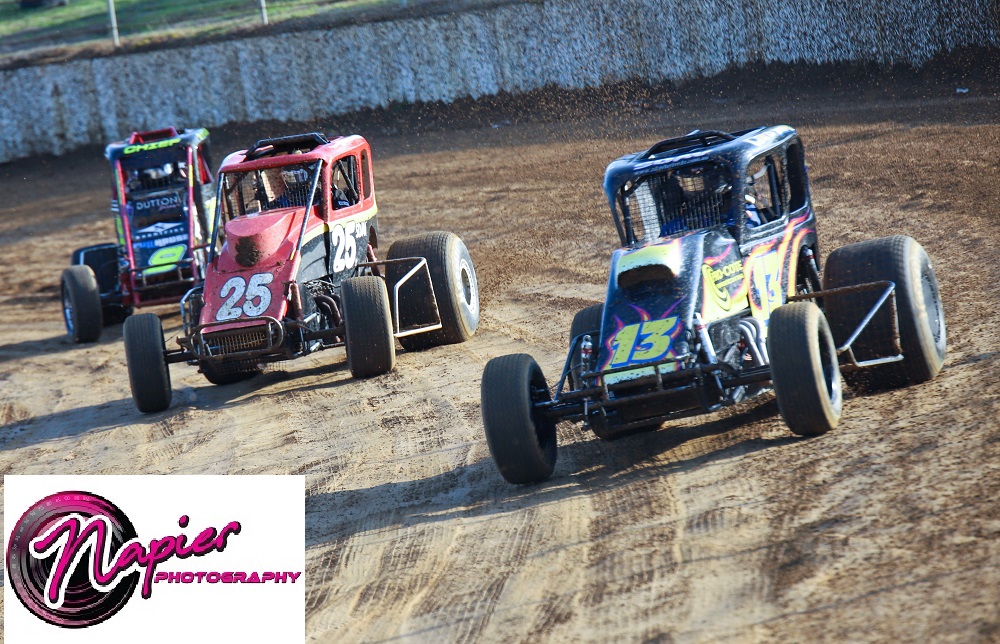 This Saturday night at Bairnsdale Speedway the Hot Rods are in town for their Victorian Title with every driver keen on earning the right to run the coveted number one for the following twelve months on their race car. The Hot Rods will be supported by all our local Sedan racing heroes in the Standard Saloons, Junior Standard Saloons, Ladies Standard Saloons, and the Division 2 Hot Rods.

With all eyes on the Victorian Speedway Drivers Association of Victoria (SDAV) Hot Rod Victorian title Shannon Meakins the defending champion has the target on his back with the likes of Dean West who finished right on his back bumper bar at Rosedale Speedway this past Saturday night keen to win. West is likely in his last season of racing and could think of no better way to go out, on top. Brendan Roberts a new racer to the class has shown he is a podium threat, Eddie Ivermee, Kali Hovey, and Phil Jenkins are others to watch.

Standard Saloon drivers in the state series point score event include some competitors following that point score plus, drivers that just want to get some laps in at Bairnsdale before the upcoming Victorian Standard Saloon title on March Labour Day weekend.

Watch for Shane Stewart the Victorian champion and his brother Chris who was the runner up at the last title, Chris is a former state champion himself. Mitch Foster, Aaron Meakins, Wayne Sheerman, Jack Yeoman’s, Nick Chrystie another former Victorian champion, Leigh Gooding, and Jacob Vuillermin as likely race victory contenders. Vuillermin set a record at our last event for fastest one lap time, this time he will be keen to take the first placed trophy.

Local Ladies are really keen for their switch direction feature event with eleven having nominated. Tash Curtis, Jemima Borkowski, Danielle Solly, Tahlia Campbell and Renae Parsons are just some of the Ladies with experience behind the wheel that should serve them well this Saturday.

Junior Standard Saloon race drivers will compete in the second round of the state series after round one was held at Drouin two weeks ago. Harry Cecil is proving to be incredibly tough to beat this season so far. However Hunter Carey, Beau Stuchbery, Blake Smith, Zac Barwise, Tyler McDermott, Deon Fyfe are all keen to get one over Cecil, they will have also competing for the first time this season Dylan Barrow. Barrow is a top racer in another form of Juniors and should make Saturday extra interesting.
Leigh Mitchell leads the entrants in Division 2 Hot Rods after setting a new fifteen lap record of the Bairnsdale track at the last race meeting. Mitchell, Troy Hutchinson, Trent Wilson are all winners this season and they are all nominated and hoping to go one up on the others. Daniel Angus, Bobby Devine, Rob Tatterson, Kane Gibson, Jordan Haley, and Peter Angus are all competitors that could shake things up and pick up their own victory.

You can find our track at 120 Deptford Road as you head out on Great Alpine Road, we are situated in Granite Rock. On race days only, if you have an enquiry, you can call 0458 617 910. We encourage you to stay in touch with what is happening our social media platforms.

Gates open from 1pm and racing begins at 5.30pm