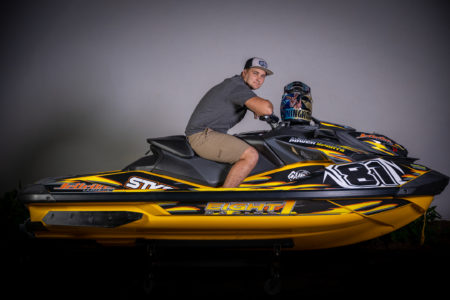 Young Aussie personal watercraft rider Bailey Cunningham has his sights set on the United States this summer having announced that he will be competing in the 2022 P1 AquaX National Championship. The 5-venue race series gets underway in Central Florida at the end of April and Bailey will fly to the States in June to join the championship for the second round in Sarasota.

Born in New South Wales, 23-year-old Bailey now lives in Cleveland in Queensland. “It’s a south-east Brisbane suburb that’s on the water with great sporting facilities,” said Bailey. “I train three times a week at the local gym, play oztag (a game similar to rugby but non-tackling) and train on the water for hours every weekend. I’ve been jet skiing since I was 16 and have now been racing professionally for four years. My parents used to race before I was born and I grew up watching jet ski videos.”

Bailey’s parents support him in everything he does and they want him to pursue his dreams in the sport. His father raced karts in the USA and was the first Australian to win the Florida Winter Tour. After leaving school Bailey worked as an apprentice jet ski mechanic for three years and first heard about P1 AquaX four years ago when he was following a few of his favourite riders. The rider he most admires is multi-time national and world champion Chris Macclugage. Bailey rides a 2021 Sea-Doo RXPX 300 and two of his sponsors – T&D Jetski Performance and Dr Plumb – will be helping him ship his ski to Florida.

Bailey will be based in Port Charlotte on Florida’s Gulf Coast with AquaX rider Bobby Cardone and his family, and he plans to race in Texas as well with Jettribe, one of his sponsors. “I will miss my family, friends and mechanic John Hollett at Sunshine Coast Powersports, one of my valued sponsors, who always makes sure my skis are good and keeps me grounded mentally,” he comments. “To be a top professional rider you need mental preparation, fitness, belief in yourself and the desire to learn and improve. My greatest achievements to date are multiple Queensland State champion, winning the New Zealand national title in Pro/Am stock in 2017, finishing runner-up in the Australian Nationals and top 8 at the World Cup the following year in Pro GP Runabout. Now I have new goals as I look forward to the challenge of AquaX racing. I raced some of the leading AquaX racers at the World Cup in Thailand and the key reason to compete in the series this year is to get myself endurance fit and to qualify for the P1 AquaX World Championship in The Bahamas.”

After racing in Sarasota in southwestern Florida, Bailey will head north in July to Michigan City, Indiana and then return to Florida in August and September for events in Daytona Beach and St. Petersburg. The Bahamas Pro Enduro World Championship will be staged at the Atlantis Resort, Paradise Island in early November.