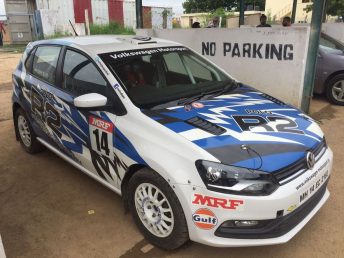 To further his international rallying career, Mike has worked hard to secure two opportunities in big motorsport nations by confirming his drives in the Coffee Day India Rally as part of the FIA Asia Pacific Rally Championship (APRC) and the final round of the FIA World Rally Championship (WRC), at Kennards Hire Rally Australia.

Mike will drive a Volkswagen Polo R2 in India with Malcolm Read in the co-driver seat, and Dunlop tyres as the duo are familiar and comfortable with how the package will perform on the notoriously difficult Indian stages.

“I am so excited to get behind the wheel of the Volkswagen in India, thanks to Volkswagen India and GT Tuner’s Benguluru. The Volkswagen is FIA R2 spec, so is a 1.6 litre car with a sequential gearbox and I think it will suit the narrow and twisty roads well,” said Mike.

“The roads are actually run in the coffee plantations and go along access roads. They run alongside mountains and the average speed can be as low as 50 kilometres [per hour]. Plus add rock-lined banks and lots of trees, and you have a very tough environment but that’s why I think the nimble Volkswagen Polo will be so good.”

Both Mike and Malcolm enjoyed the buzz of the Indian event based in Chikmagalur last year and vowed to return again this year, when the opportunity with Volkswagen presented itself.

“It [Coffee Day India Rally] is a very cool experience I must say. There is a crazy amount of spectators at every junction or spare piece of road. Although, the first super special stage is a real highlight because thousands of people watch us fly around the Amber Valley School football field on a man-made track, which is very unique,” continued Mike.

However, the first event on Mike’s calendar is the WRC round in Coffs Harbour, where himself and Malcolm will compete in a Citroën DS3 R3, prepared by Rallyhire Australia which Mike says is “like a dream come true”.

“I have been rallying for seven years now so think the timing is perfect to do my first WRC rally and it is always something I have wanted to do. I can’t wait to race against the best in the business and especially on the fast flowing roads of Coffs Harbour in a Citroën,” said Mike.

Mike said the Citroën DS3 R3 is “probably the fastest two-wheel-drive car out there” with its 1.6 litre turbo engine and paddle shift gearbox. “A similar car won the 2015 Australian Rally Championship, so we know it’s a proven package.”

Rallyhire is headed by Ron Cremen who has vast experience with domestic and international teams, including the Citroën Abu Dhabi team and has run drivers including Eli Evans, Tony Sullens and Adrian Coppin.

Co-driver Malcolm Read from Hamilton is also looking forward to the events with Mike and said he’s excited to compete with him again, especially at the WRC round where his brother will also be co-driving.

“Mike and I haven’t had a lot of events together this year so I’m really looking forward to doing two rallies back to back. He’s a great driver so I’m sure he will adapt quickly to both the Volkswagen and Citroën and hope we can get a solid result at both,” said Read.