B-Quik all set to defend title advantage in Buriram

B-Quik all set to defend title advantage in Buriram 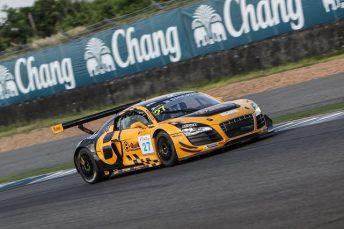 B-Quik Racing is all set to head for Buriram’s Chang International Circuit as Thailand Super Series (TSS) resumes a month and a half since the previous round, the Bangsaen Grand Prix. Henk J. Kiks and Daniel Bilski will lead the line as usual in Super Car GTM Plus, Thai motorsport’s headline racing category.

Bangsaen also marked the halfway point of the TSS season and we are perfectly placed in the Super Car GTM Plus Teams’ title chase – our primary objective of the year – as we sit astride the championship classification going into this weekend’s double header. We have 98 points while our closest rival team is 16 points adrift.

However, it’s a very slender cushion and we will be looking to defend this advantage and further build the gap as following this round there will be just one more remaining, again in Buriram, and with that event having a ‘triple header’ format that’s likely to be the title decider so we need to head into the season closer in the best possible position.

As usual Henk and Daniel will drive the #26 and #27 Audi R8 LMS Cup entries, respectively. From the five races held so far we have notched up eleven podiums in Super Car GTM Plus, however we won’t have the luxury of a third entry this weekend to collect additional points so neither of our drivers can afford to pick up a DNF. In the Drivers’ standings meanwhile Daniel is third and Henk fifth – and with these standings being very close both drivers will be looking to push further up the table ahead of that season ending triple header.

The Audi R8 LMS Cup hasn’t been able to get onto the Super Car GTM Plus front running pace so far this year but we expect it to edge closer this week. It means the team and drivers will have to work very hard to compensate and immediately capitalise on any opportunities that arise.

Henk and Daniel will have an extra boost this weekend as Pierre Kaffer will be joining the team in Buriram to coach them and offer his input into setting up the Audis. The German pro driver has a vast bank of experience to count on in a glittering career that’s seen him win some of the most legendary sportscar races, including the 12 Hours of Sebring with Audi and the Le Mans 24 Hours with Ferrari.

Meanwhile, in Super Car GTC we will have a full strength line up with Attapot Sriprom and Ian Geekie driving our Porsche 996 GT3 Cup entries. This is likely to be the last time we run the ‘996’ in Super Car GTC as we will upgrade these entries in time for next month’s season closer. We will as usual support our customer entry for Thomas Raldorf.

Finally, as usual, we will enter our pair of Honda Brios in Super Eco for Narin Naeosathon and Sathaporn Veerachue; the young pair are midway through their second year in the entry level category driving in these little machines and now with plenty of experience of Buriram to call upon, as well as trips to the podiums, we expect them to keep making further progress and chase more podium visits.

Henk J. Kiks: “We’re pleased with the season so far in terms of grinding out results and collecting points where we have a clear deficit to the GT3 cars as well as the Huracán in GTM Plus, so if we want the title we are going to have to do it the hard way and battle for every point. On that score so far so good and both Daniel and I will be looking to get onto the podium in both races this weekend and collect more points. We’ve had a DNF each so far and we can’t afford anymore. Hopefully the Audi will be a bit closer to the pace this weekend in Buriram and we can have a good showing.”

Daniel Bilski: “After a tough Bangsaen Grand Prix weekend I’m really looking forward to being back at Chang International Circuit this weekend. We should have left Bangsaen with a lot more points on the board, but after being taken out of race two, and being hit in race three, we didn’t get the results we deserved. The cars are all sorted and the injuries I sustained in Bangsaen are pretty much healed, so we’re ready to go. There are five races left to go in the season, and you can be assured that we will spare nothing in taking the fight to our competitors for the title. Despite being out-gunned by the newer and faster machinery in GTM Plus, we’re putting the other teams on notice.”

Attapot Sriprom: “The Buriram circuit is quite different from Bangsaen so the preparation must different as well as my driving style. The technicians have checked all the parts, especially engine and gearbox, as we had some issues with gearbox in Bangsaen and we don’t want it happen again in Buriram. Now I’m P5 in the driver’s standings and I want to get more points to improve my position so my aim is get on the podium in upcoming races.”

Ian Geekie: “Following a tough weekend at Bangsaen I am looking forward to getting back behind the wheel of the #25 Porsche. Buriram is a new circuit for me so it will be a steep learning curve. I have been to the track many times but have only done a few laps there when Khun Preeda took me round in the Safety Car. Really looking forward to the weekend and being a part of the fantastic B-Quik team.”