B-Quik ready to get back on track in Buriram

B-Quik ready to get back on track in Buriram 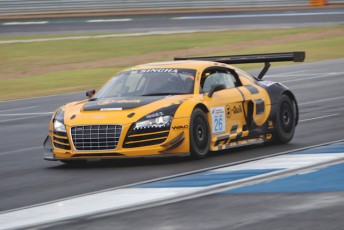 Team Leader Henk J. Kiks is raring to be back in action next weekend when Thailand Super Series revisits Chang International Circuit, Buriram. He will be targeting podium finishes in the #26 B-Quik Racing Audi R8 LMS Cup

MEDIA RELEASE: B-Quik Racing is now busy counting down to the second round of Thailand Super Series (TSS) 2015, which will take place at the new Chang International Circuit in Buriram, in just a week’s time (31 Jul – 2 Aug).

The team will enter four cars in the event, with Henk J. Kiks (#26 Audi R8 LMS Cup) and Daniel Bilski (#27 Porsche 997 GT3 Cup) leading the fight for honours in Super Car Class 2-GTM while, as usual, we will also field two cars in Super Eco.

It’s been a long two and a half month break since TSS kicked off its much-anticipated third season, also in Buriram, back in May. In the meantime B-Quik Racing is confident that it’s resolved the technical issues that cost the #26 Audi valuable points then. Team leader Henk is raring to be back in the action and will be targeting podium finishes in the Audi R8 LMS Cup that would get his season back on track.

Daniel, meanwhile, will return for his second taste of the FIA Grade 1 Buriram circuit, as well as of TSS. He’s joined B-Quik Racing for a full season in Super Car Class 2-GTM this year and made a promising debut in Thailand’s top domestic series in May, nabbing a podium finish on his first race at Chang International Circuit, where he was driving the team’s Porsche 997 GT3 Cup.

The Australian driver is also competing in the ‘Audi R8 Cup’ Asia one make series this year for B-Quik Racing, as well as the Asia Classic Car Challenge, so it’s turning into very busy year. Bringing home more team points and chasing the podium next weekend will be the main priorities for Daniel as he makes a return Buriram track and that means with experience of the circuit at the season opener already under his belt his laptimes should improve further.

As well as the headlining entries in Super Car, B-Quik Racing will enter its two Honda Brios in Super Eco as usual. Regular drivers Attaphot Sriprom and Nattaphon Rattanawong will be behind the wheel and they are fresh from a robust weekend in these cars at True Visions Bobby Hunter Super One Race earlier this month and will be looking to build on the podium finishes they collected during May’s opening round of Super Eco in Buriram.

Henk J. Kiks (#26 Audi R8 LMS Cup): “We really didn’t have the start we wanted in round one but we’re confident that the car problems are finally resolved and we can chase for results. Clearly the Audi has the pace at Buriram so we need to unlock that and get some decent results. Daniel made the podium in the first race so we expect him to be able to build on that.”

Daniel Bilski (#27 Porsche 997 GT3 Cup): “It’s been a long gap between the first and second TSS race weekends and I can’t wait to get back to Buriram and get back into the 997.

“I feel quite ‘race-fit’ after the triple race weekend with Audi in Taiwan a few weeks ago, so I’m super keen to get back in the 997 and improve my lap times from the first TSS weekend.

“I’m still on a bit of a high after those Audi R8 LMS Cup races, two podiums from three races, including a win, have really given me a nice confidence booster.

“Having raced in Taiwan with high humidity and 67-degree temperatures in the car, it was good conditioning for the in-car conditions we expect in Buriram.

“It will be exciting to share the weekend with the Porsche Carrera Cup Asia and I’m looking forward to seeing lots of familiar faces in the paddock. We will be pushing for big results next weekend and I’ll be doing my best to bring home maximum points.”