B-Quik ready as the Audi Cup moves onto Korea

B-Quik ready as the Audi Cup moves onto Korea 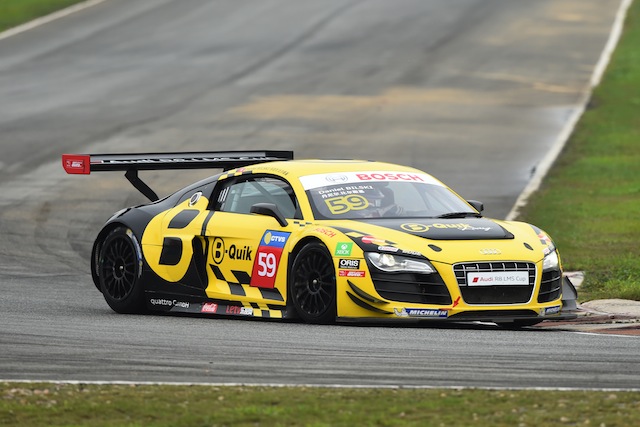 Daniel Bilski got off to a flying start in the ‘Audi R8 Cup’ one make series when it visited Zhuhai back in mid-March for the 2015 season opener. The Australian sweeping to an emphatic AM Class victory in the second race of the weekend. pic: Audi Sport

After a break of almost two months since the opening round of the series took place at Zhuhai International Circuit in China, in mid-March, the ‘Audi Cup’ reconvenes at Korea International Circuit, this coming weekend (16-17 May) for Round 2 of the 6 that make up the 2015 calendar.

Daniel Bilski will drive the #59 Audi R8 LMS Cup once again and for the Australian it represents back-to-back weekend’s in competitive action for B-Quik Racing as just a few days ago he made his debut in Thailand Super Series (TSS) behind the wheel of the Bangkok-based team’s #27 Porsche 997 GT3 Cup.

In fact last weekend at a blisteringly hot Chang International Circuit in Buriram Daniel got off to a real flying start in TSS, taking a trip to the podium at the end of Race 1, which was also his first ever race in Thailand. Combine that with the win he scored in the Amateur (AM) category in Race 2 of the opening round of the Audi Cup at Zhuhai (albeit that much-shortened race didn’t count for championship points) and he will be looking to build on that excellent momentum over the next few days.

Round 2 of the Audi R8 Cup 2015 will see the first race of the weekend (Race 3 of the year) going to green lights at 1600 tomorrow afternoon, Saturday 16 May, while the second race (Race 4 of the year) is scheduled for 0950 on Sunday 17 May. 22 cars are expected to take part while Daniel runs in the hotly contested ‘AM’ class.

“The first weekend was a massive learning experience and we showed we have the pace to compete for podium positions in the AM class. The B-Quik crew did a great job and had some very tough challenges to learn not only how the series ran, but also the various new procedures over the weekend. The guys did a great job and given how many times they had to strip and freshen the car over the weekend, they are building their experience on the R8 LMS very quickly! David Thomas was fantastic in guiding the B-Quik team over the weekend so a big thanks to David. It was also my first weekend working with my new Race Engineer Stephane Folio, who was a great guide and help. It always takes time for a new team to get into a good rhythm, but the B-Quik boys, Stephane, David and myself kicked things off really well. My next challenge is to find out exactly how many languages our team has covered between us, as at the moment, it’s Thai, French, English, Polish and German and I think Italian as well. It really is international racing!

“Korea is going to be super tough, but very exciting. As a recently built Formula 1 circuit, it’s wide, fast, very technical and long. I haven’t raced there before, but I’m spending as much time as I can in the simulator to get used to the flow of the circuit. It’s a very challenging circuit, with some very slow, sharp turns, a super-fast back straight which will see the cars max-out in 6th gear and some very technical fast curves and essess.

“One of the terrific parts of the series is the open data policy. This allows you to benchmark yourself against data from anyone on the grid. The environment, whilst being fiercely competitive, is also a lot of fun off the track, the drivers and teams spend a lot of time together. There are some world-class pro drivers in the series and a number of them have been extremely helpful so far in sharing feedback and information.

“Korea is going to be a bit tougher for me than others as the majority of drivers in the series have raced there already. That said, I’m confident in the momentum we are building and will be pushing for podiums in both races there. I can’t wait to get out for first practice!”