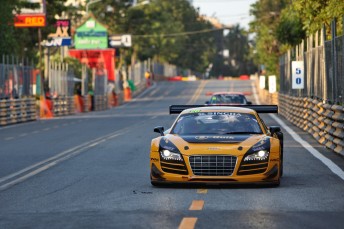 B-Quik Racing is gearing up for Thailand Super Series

MEDIA RELEASE – B-QUIK Racing – B-Quik Racing is ready for the challenge of the new season in Thailand Super Series.

Thailand Super Series, the premier domestic motorsport championship, enters its third season this year with the  Super Car Class 2-GTM set to be hotly contested with close to two dozen cars expected to fight it out over four rounds and nine races.

Super Car Class 2-GTM is really the place to be this year and the category will see a mouthwatering array of top drivers behind the wheel of cutting-edge racing machines from brands including Porsche, Ferrari, Audi, Lamborghini, Toyota and Holden.

B-Quik Racing will enter its Audi R8 LMS Cup and Porsche 997 GT3 Cup in this category and will be looking to make a very strong impact in the fight for the Drivers’ and Teams’ championships.

Team leader Henk will be back for a second season in the Audi R8 LMS Cup.

He will be hoping to capitalise on the pace that the car demonstrated during last year’s TSS round in Buriram by leading races and posting fastest laps, although issues eventually kept him off the podium.

Those performances provide a robust platform for the Dutchman to build on at the season opener next weekend and the team will be hoping that the data they acquired last year with the car will get them out of the blocks fast.

Meanwhile, the #27 Porsche 997 GT3 Cup will be in the hands of Daniel for the full season this year. The Australian driver has plenty of experience racing the ‘997’ internationally so he needs no introduction to this car but he will be new to CIC and will have to learn the circuit from scratch.

Daniel first joined B-Quik Racing for the Merdeka Sepang 12 Hours last summer. As part of the three strong driving lineup (which included Henk) the team successfully battled back from numerous technical issues to finish in P2 and firmly on the podium during what was B-Quik Racing’s first ever international race as well as first ever endurance race.

Although the ‘997 generation’ racecar is ageing fast and considered to be past its best in the highly competitive Super Car Class 2-GTM category, this car, in the hands of Darryl O’Young, however bagged a double win during the most recent TSS round (in Bangsaen last December) and cannot be counted out of the podium places.

The car is certainly sorted and reliable so Daniel will be looking to quickly learn CIC and support the team by bringing home valuable points.

Henk J. Kiks (#26 Audi R8 LMS Cup, Super Car Class 2-GTM): “The team is now really getting into the swing of things for the upcoming season. We have run two races so far this year, in the Audi Cup in Zhuhai with an R8 and in Asia Classic Car in Sepang with the 944 and E30, but now the focus has shifted to TSS and the first two races in Buriram.

“It’s a slightly hectic period as after Sepang the whole crew flew to Thailand to start preparing the R8 and the 997 for Buriram. B-Quik Racing is going seriously into the season, with two cars on the grid for the full year in Class 2 and the target is simple, to win the Drivers’ and Teams’ championships.

“In order to do that the preparations must be flawless and large stocks have been delivered of spares and consumables and the boys have learned a lot more already this year from Zhuhai and Sepang.

“We have extra planning and preparation to do also as after Buriram the team will immediately move to Korea for the next round of the Audi R8 Cup.”

Daniel Bilski (#27 Porsche 997 GT3 Cup, Super Car Class 2-GTM): “I’ve been reading the various series press releases and clearly there is going to be some very serious competition in Class 2.

“I’m flying in a little early for the first race with a hope of getting to know the Buriram circuit a little before official practice. I’m watching footage from previous races at Buriram to better understand the circuit.

“It looks like a fast flowing circuit with some pretty tricky corners thrown in. I like the look of it and I am sure we’re going to be some very tight racing.

“I’m also sure we are going to have a tough fight on our hands with the newer and faster cars, but I hope to bridge the gap once my familiarity with the circuit grows.

“Darryl O’Young showed the car is still very competitive when he drove it last year, so the benchmark has been set.

“I’ve not raced in Thailand before, and, as it’s B-Quik’s home series, I’m very excited to be a part of the team in TSS.

“The team is in full swing preparing the cars and I’m looking forward to seeing the guys again soon.

“I’m not only looking forward to the racing, but experiencing more of the Thai culture and taking in the sights and experiences of racing in a new country. It’s going to be a big week and I can’t wait for it to start.”