B-Quik races through the rain to win the championship

B-Quik races through the rain to win the championship 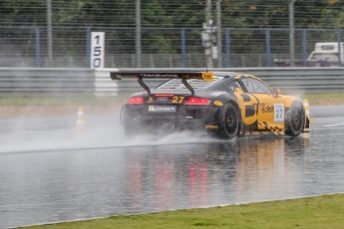 What a weekend! What an incredible weekend for B-Quik Racing! On paper it looked like we were going to have a really tough time achieving our objectives and the final round of Thailand Super Series 2017 certainly started off that way. We ground out the results on Friday and Saturday at Buriram’s Chang International Circuit to retain a very slender advantage in the Teams’ championship, but then come the Sunday rain lashed the circuit. We thrive on challenge and adversity and after one of the most thrilling races in Thai motorsport history Daniel Bilski powered his way through the terrible conditions to claim victory and with Henk J. Kiks backing him up superbly we sealed the Super Car GTM Plus Teams’ championship – the most prestigious trophy in national motorsport – in some style.

We arrived in Buriram for the season closer with a single point advantage at the top of the Teams’ championship standings. Just being in that position had been an almost impossibly tall order as the Audi R8 LMS Cup we run this year simply can’t get onto level terms with the GT3 cars in the exciting new Super Car GTM Plus category. But we’ve dug in as a team all season and ground out the results, race by race, lap by lap.

In the first of the three 15-lap races that comprised the season closing weekend Daniel and Henk finished third and sixth which kept us at the top of the Teams’ standings, but again by just 1 point. In the second race as the duo took P3 and P5 to give us a double podium we opened that cushion out to 6 points but all the momentum was with the new second placed team and we would have to slug it out right to the wire.

That brought us up to Sunday and potentially another mountain to climb, but then it rained – and the rest is history.

The rain, which had somehow avoided the main programme all week, although there were a few wet patches on Friday, came in with a real vengeance mid Sunday afternoon and for the start of the Super Car GTM Plus/GTM the track was drenched. Then rain started falling again on just the second lap and the race turned into what’s going to be remembered as one of the classics of Thai motorsport.

From the green lights Daniel was unleashed, the Australian revelling in the treacherous conditions as he quickly – and tenaciously – worked his way up to the race leader, pressurised him into a mistake and grabbed P1 just before the Safety Car was deployed. When race went back to green flag conditions again Daniel picked up where he had left off, racing away into a commanding lead, one the #27 Audi would never relinquish as he took the chequered flag first in Super Car GTM Plus.

That was our first win of the year in the new Super Car GTM Plus category and with Henk, who had been struggling with a down-on-power Audi all week, coming home in a superb fourth after having had to start the race from the pitlane, it gave us a double podium finish for the second day in a row. More so than that the points Henk added to the tally were vital to ensure we sealed the inaugural Super Car GTM Plus Teams’ title having fought tooth and nail all weekend for the prestigious honour.

Adding icing to the cake, Daniel also moved up to P3 in the final Drivers’ championship standings.

After three years running the Audi’s R8 LMS Cup in Super Car we were able to sign off with a final victory. Next year we will deploy new cars that are more suitable for GTM Plus but it was a perfect script to finish our time with these cars by producing a final win. Over the last three years with Audi’s R8 LMS Cup leading the frontline for B-Quik Racing major highlights include three podiums in the Sepang 12 Hours topped off by victory last year and two titles for Daniel in the pan-Asian Audi R8 Cup.

In Super Car GTC Ian Geekie and Attapot Sriprom each made a well-deserved trip to the podium, in the first and second race respectively. For the Australian, who was wrapping up his first season with the team, fifth place on Saturday, where he kept his cool while it was going off all around him, was an excellent way to sign off.

On Sunday, Attapot, who retired early from the first race with transmission problems, bounced back strongly to finish fourth on Sunday, his fourth podium of the season. In fact, it’s going to be a complete fleet renewal for the team over the close season as the Porsche 996s that Ian and Attapot drove this year will be replaced with 997 variants for 2018.

Henk J. Kiks: “We came into this final round ready to fight to the wire for the Teams’ title, it’s been so close all season and we needed to give it the maximum. The team rose to the occasion, we just got on with grinding out the results and then come Sunday, it rained and that evened everything out. What an awesome end to the year! Congratulations to Daniel for a superb drive and that allowed us to sign off with the R8 Cup in real style. Visibility was almost non-existent with all the spray and with other cars spinning and also accidents but we couldn’t afford either myself or Daniel going off as we needed both cars at the finish and in the points. We got the job done. Now it’s time to replace the Audis with GT3 versions and get ready for next season.”

Daniel Bilski: “Each race had its challenges, with Race 1 being wet/dry, Race 2 being compromised by oil continually sprayed on my car from a competitor and then the huge rain in Race 3. Driving hard, but smart was key, as we needed maximum points. The final race was a bit special, the rain came, hard. There was no holding back from the start, it was maximum attack. Conditions were incredibly tough so it was one of the most focused drives I’ve ever done. The R8 LMS Cup was brilliant in the wet and I quickly worked out where the grip was, or wasn’t. The Safety Car negated the lead I had built at halfway but at the restart it was back to 100% attack. After winning the AM and Masters titles in the Audi R8 LMS Cup in 2015 and 2016, to win the GTM Plus Teams’ Championship title means a hat-trick of Championship titles for B-Quik Racing. I just couldn’t possibly be more proud to be part of, and drive for, such a wonderful team. Thank you guys.”

Attapot Sriprom: “It was a superb weekend, very hard and very challenging. In Race 1 I had some problems with the gearbox and retired early in the race. Race 2 was pretty hard due to the wet track, I started from P9 and passed cars to get to P5. Then there were two cars ahead that got into accident so I moved up to P3. Unfortunately, the gearbox had problems again late in the race that meant I finished in P4. However, I really enjoyed it. P4 on the podium is a good result for me in the final race. Thank you the team for their hard work and giving me a good car. Lastly, I’d like to thank everyone who has supported me this season.”

Ian Geekie: “Amazing to think the TSS season is over. It’s been fantastic to be a part of B-Quik Racing who have provided me with a great car and great support throughout the season. Racing is seldom constant and the final round was again one of highs and lows. I was finally able to show some good pace in the car and secured my first podium in Race 1 and was looking forward to doing even better in Race 2. The racing gods had other ideas however as I was laid low by a virus that made it impossible for me to drive on Sunday. A very disappointing way to end the season but nothing I could do. Overall a fantastic experience and many thanks to B-Quik for their support and I hope to be back next year.”