B-Quik in the hunt as TSS title finale beckons

B-Quik in the hunt as TSS title finale beckons 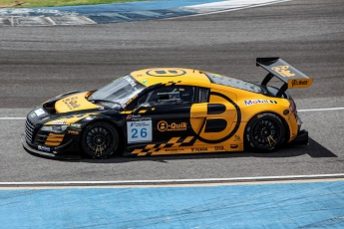 Thailand Super Series 2017 heads for the fourth and final round of the year, to be held next week (21-24 September) at Buriram’s Chang International Circuit, and it’s going to be an explosive encounter for our Audi drivers Henk J. Kiks and Daniel Bilski as Super Car GTM Plus gets set to sign off its inaugural season with a title-deciding triple header. At the same time Attapot Sriprom and Ian Geekie will be back on the grid driving our Porsches in Super Car GTC and we will of course be represented in Super Eco.

It’s going to be an action packed weekend as Super Car GTM Plus will feature three races – one each on Friday, Saturday and Sunday – a similar format as was the case at the Bangsaen Grand Prix back in July. That means there is a triple chance of success for everyone and – crucially – three helpings of championship points. As the final round of the season there is still everything to play for with the titles wide open and the stakes are sky-high.

Next weekend’s fourth and final round of Thailand Super Series entails a rapid return to the North East for B-Quik Racing as the previous round was also held at Chang International Circuit, taking place just a month ago. Then Henk and Daniel endured a tough weekend as we upgraded the Audis and had to work hard to find the optimum setup direction. Rain that disrupted practice and qualifying cost us valuable track time and as a result we were always playing catch up. This time we should have the benefit of that hard work and clear glimpses of improvements, but with our Audis not able to match the pace of the fastest GT3 cars it’s going to be another weekend where we have to fight tooth and nail for every inch of track position – but as a team that’s what we are good at, we rise to the toughest challenges.

The Super Car GTM Plus Teams’ championship is clearly our primary target, it’s all very finely balanced but Buriram doesn’t suit the Audis so we will have to work hard if we are to bring home the trophy. It’s agonisingly close – we currently lead the classification with 124 points, just 1 point ahead of in form PSC Motorsport, while Singha Motorsport Team Thailand, 15 points back, and Vattana Motorsport, 17 points adrift, are both in with a clear shot of the title. It could easily go any one of four ways, but we will fight as hard as we can, even if the odds clearly aren’t stacked in our favour.

In the Drivers’ classification, Daniel is fourth and Henk fifth – and it looks like it’s going to be a weekend where the drivers will have to consolidate and defend their positions in the table, there is little scope on paper at least to make up further ground. However, with three races coming up over the weekend, any DNFs could prove to be costly so Henk and Daniel will be pushing hard to capitalise if misfortunes to hit our rivals, especially as there are some big battles brewing for the final positions.

In Super Car GTC Attapot and Ian will be back in action in the Porsche 996 GTC Cup entries. Neither has had the season so far they would have wanted although Attapot has enjoyed three trips to the podium so far and will be looking to add to that useful tally this weekend as well as securing his current fifth place in the Drivers’ classification. Ian, who missed the first round of the year, has had a tough season with both mechanical issues, and being caught up in incidents out on track that were no fault of his own which have combined to leave him with slim pickings. The Australian will be looking to unlock his pace for the final double header and end his season with two strong points finishes.

In Super Eco we will enter just a single Honda Brio this time for Sathaporn Veerachue and we expect him to be pushing for the class podium. During the August round his teammate in Super Eco, Narin Naeosathon, suffered a big incident. The team is very happy to report that Narin is making a speedy recovery and is long since out of hospital but it will still be a little while longer before he’s back to being fully fit again.

Henk J. Kiks: “It’s been a pretty tough first year in the new Super Car GTM Plus category as the Audi R8 LMS Cup just cannot get on terms with the GT3 cars or the Huracán Super Trofeos, but we knew that and knew it would be a year of fighting hard for everything and so to be right in the Teams’ title fight coming up to the final races of the year really shows how much effort we have put in. We will get our heads down and work very hard all weekend in Buriram to try and secure the title and then evaluate our future direction for GTM Plus.”

Daniel Bilski: “I’m looking forward to the race weekend but know it will be extremely tough to improve on my current P4 standing in the championship. That said, we will be unleashing every last ounce of performance we can to have a successful end to the season. With the improvements we made to the cars recently, we’re now closer to some of the faster GT3 cars. It’s been nice to see the improvements the team made convert to lap time gains. The team has worked really hard this season, so I want to make sure to repay that work with some good results to finish the 2017 championship on a high.”

Attapot Sriprom: “The final round is very exciting because at last we will know who are the champions. After last race in August we have had only one month to prepare the cars but I’m sure mine will be good and ready for the upcoming race. It’s not easy to chase the cars in front of me on the long straights at Buriram because my car has no turbo but I think it may be possible to gain more advantage when I’m in the corners so I have to use every opportunity I can find to try to get to a podium finish.”

Ian Geekie: “It’s hard to believe that the final round of the season is fast approaching. Time flies when you’re having fun, and it has been fun, challenging at times, but fun. Definitely looking forward to getting back behind the wheel of #25 and driving the demanding Chang International Circuit. Last time out I had the speed but not the hoped for results and will be giving it everything to get a good result for B-Quik Racing.”