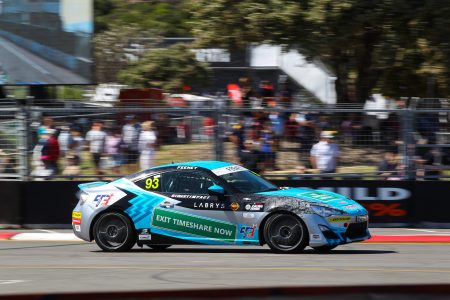 The 16-year-old has been a star in this year’s series, winning two races, becoming the youngest driver to have ever won a race in the all-Toyota Series. After missing Bathurst, he is looking to end the season strong – particularly with the Exit Timeshare Now colours on board.

“It’s awesome to have this platform to launch a new product into the Australian market in Exit Timeshare Now,” said Feeney. “The guys are really enthusiastic about jumping on board – and while I’m a bit younger than their target market, I’ve researched the timeshare holiday industry and its background and I can see the burden that it can create for families long term.

“I’m really hoping we can bring home a strong result this weekend – missing Bathurst has hurt us in the Championship standings, but we can certainly be part of the mix to finish up the Title order come Sunday afternoon.”

For Exit Timeshare Now founder and Managing Director, Tony Lenan, the opportunity to get in on the ground floor with emerging, young talent like Feeney was an opportunity too good to pass up.

“I’m a lifelong motorsport fan and I have tracked Broc’s progress throughout the season and he he’s a rare and prodigious talent and one that Exit Timeshare Now is proud to be associated with,” said Lenan. “The television audience for Newcastle will be one of the highest of the year, the location and track is spectacular and it’s an awesome opportunity for us to launch.

“Exit Timeshare Now is a brand new industry category in coming into the Australian financial and property market. Companies like Exit Timeshare Now are huge in the UK and the US and with our team made up of some very experienced property and investment professionals, we can release the burden many Australians are feeling as a result of timeshare investment.

“The typical timeshare investment is between 40 and 60 years and you are locked into that, even after you’ve passed away – the expense then gets passed onto your family.

“On average the costs are between $600 and $1500 per year for a timeshare investment and increasingly we’re seeing the children of those who’ve signed up for timeshare in the late 80s on the Gold Coast particularly inherit their parents’ expense and they either don’t use it or don’t want it. So we’re here to help them move on.”

“We’re very excited to be launching into the Australian market at the Coates Hire Newcastle 500 with Broc Feeney and his team,” Mr Lenan added. “We know Broc will do our brand proud as he has done for all those associated with him throughout 2018 so far. We’re hoping it is going to be the beginning of a long and fruitful association.”

For more on Exit Timeshare Now and to apply for a quote visit www.exittimesharenow.com.

The Toyota 86 Racing Series at the Coates Hire Newcastle 500 got underway with practice today before qualifying and racing on Saturday and Sunday.