Australian title up for grabs

Australian title up for grabs 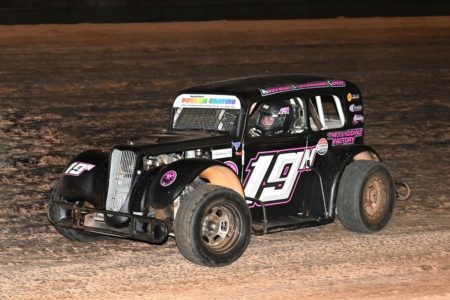 A competitive field of drivers from around NSW, along with some interstate entrants, are set to converge at Sydney’s Valvoline Raceway (NSW) for this Saturday night’s Narellan Powder Coating supported Australian Legend Cars Title.

The 2019-20 season running of the event, which is sadly going to be without defending Australian Title holder Nathan Camilleri due to injuries he sustained in a crash during last year’s US Dirt Nationals over in America, is going to see one of the most hotly contested in the event’s history.

Although the defending Australian Title holder Nathan Camilleri is sidelined, the Camilleri surname is still going to be prominent, with Nathan’s younger brother Liam representing the family name. Liam Camilleri is certainly not to be taken lightly and in his short period in the class has already scored a pair of Australian Title top-10 finishes. Showing winning form so far this season, Camilleri heads into this Saturday night’s Australian Title as one of the leading contenders.

As the current NSW and Victorian Champion, Troy Bolton has his eyes set on adding the Australian Title victory to his ever-growing trophy cabinet. It’s not going to be an easy task, but the Canberra-based racer, who finished just off the podium in fourth at last season’s Australian Title, is going to be right up there amongst the front runners.

Other drivers in solid form this season and hoping for a solid Australian Title showing are going to be the likes of John Egan who has finished on the podium in minor positions in both the recent NSW and Victorian Titles, this season’s NSW Title runner-up Jacob Griffin, Dylan Goodger, Nathan Moreau, and Matt Gordon (Qld). It’s interesting to note all the above drivers have finished inside the top 10 in various past Australian Title attempts.

Returning from a six-month American trip recently, Sean Rooney is hoping this experience, which saw him pit crew for one of world’s leading Legend Car racers in Tim Brockhouse as well as making numerous cameo racing appearances, is going to hold him in good stead for a solid Australian Title campaign.

410 Sprintcar racer Sam Putland isn’t making the long trek from South Australia to just make up the Australian Title numbers. For Putland, this will be his Valvoline Raceway debut.