Australian tarmac rally title to be decided at final round

Australian tarmac rally title to be decided at final round 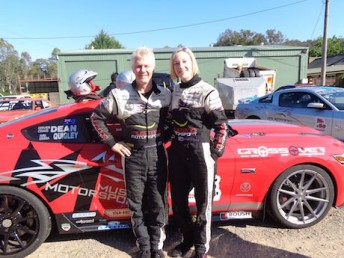 MEDIA RELEASE: The battle for the 2015 Australian Tarmac Rally Championship crown is set to be a thriller, with three contenders holding an equal chance of victory when the final round is run in Victoria next month.

The third round ­– the Great Tarmac Rally – which was run near Marysville last weekend (November 14-15), was a classic case of hero to zero for Adelaide’s Tristan and Kate Catford. They came into the event with a 61-point lead in the 2015 title chase but failed to finish after an as-yet undiagnosed mechanical problem with their 2006 Mitsubishi Evo IX on Day One.

Melbourne’s Craig Dean and Emma Quigley won the rally in their brand-new 2015 Shelby GT Mustang and gained the series lead, while defending champions Danny Traverso and Bernie Webb (2005 Mitsubishi Evo IX) came home in second, to be second in the points tally.

Sydney’s Andrew Bollom and Lee Challoner-Miles finished the GTR in third place outright in their 1998 Mazda RX7 SP, but are not in contention for series honours. However, despite their DNF, the Catfords are still in the race with double points on offer at the final round, the Snowy River Sprint, which will be run out of Lakes Entrance over the weekend of December 5-6.

In the outright classic division, it will be a similarly tight battle with Keith Morling and son Alex (1976 Ford Escort Mk 2) nine points ahead of Mick Downey and Jarrod Van Den Akker (1977 Holden Torana SLR5000) with David and Ingrid McCrow (1969 Ford Capri 1600 GT) a further 19 points behind. The Morlings were the only crew of the trio to finish the GTR; the other two duos were halted by mechanical issues on Day Two.

Behind the Morlings, the event honours went to Laurie Burton and Russell Hannah (1976 Datsun 260Z) in second and Mark Clair/Stuart Greaves (1974 Porsche 911 RS) in third.

Craig Dean admitted he was surprised to find himself in first place, 47.6 seconds ahead of Traverso. The tight and twisty sections of the Yarra Valley hills seemed better suited to the smaller 4WD cars, but there were enough long stretches to allow the Mustang to open up, and his rival graciously acknowledged he was driving well.

“It was a bit unexpected to win this,” said Dean, head of Ferntree Gully-based muscle car specialist, Crossover Car Conversions.

“It’s a brand-new car that we only ran for the first time last weekend. We made a few adjustments on the basis of that outing and while we went hard and the car ran well, we certainly didn’t anticipate this sort of result.

“Emma did a great job on the notes and kept me on the straight and narrow, and we’re both really looking forward to the showdown at Lakes Entrance in a couple of weeks’ time.”

The Great Tarmac Rally was run in perfect conditions. Made up of 13 stages covering 230km, it utilized the iconic Reefton Spur road between Marysville and Warburton on Saturday, and the Eildon/Jamieson/Big River road near Eildon on Sunday.

The Snowy River Sprint is made up of 20 special stages over 320km, over roads in the hills behind Lakes Entrance. It is open to both competition and touring category entries, and limited places are still available.

Further information on the event, including entry details, is available from event director Peter Washington (0418 337 955) or the website:http://www.australiantarmacrally.com/