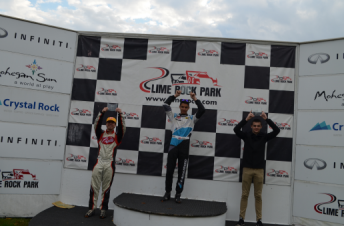 Winning a championship is special.

However, one has to look back to last year to see how this story begun.

Gabin, an Australian whose family resides in the city of Perth, was a successful kart racer who like many of his young competitors, had a dream of racing formula cars.

Fueled by this desire, Gabin began researching all of his options, eventually stumbling upon Skip Barber and the unique scholarship system provided by Mazda.

“I saw a fellow Australian competed in the ‘Karts to Cars’ shootout in 2012, so I looked into the USA more closely.

A deciding factor was the opportunity to do the ‘Karts to Cars’ shootout. Winning the shootout and the Mazdaspeed scholarship ultimately led to me being able to compete in the summer race series.”

A dream was quickly becoming a reality, as Gabin was now packing his bags to pursue his first racing season in cars thanks to the Skip Barber and Mazdaspeed Scholarship.

Switching Australia for North America was a big change for the young Australian to cope with, so in addition to getting the results on the track, he was determined to enjoy the experience a different continent had to offer.

“Travelling to so many different states was quite an experience in itself. I’ve really tried to enjoy the journey and not let the stress of racing get in the way of what is a once in a lifetime opportunity.”

Once the season got underway, Gabin got straight down to business and chalked off a win at the very first event.

Being so far away from home, the result was significant as it re-assured the young charger from Perth that he had the immediate potential to win races and challenge for the championship.

But there were many obstacles in the way, mainly in the form of his rivals.

With drivers from all over the world competing in the series, prevailing in an established series such as Skip Barber was always going to be tough, especially when one considers that drivers such as Ryan Hunter-Reay, Charlie Kimball and Spencer Pigot all began their careers at this level.

“Ben Auriemma, Nikita Lastochkin, Michai Stephens. These guys were all serious championship contenders, which was great for competition and made me work hard to win towards the end of the year when it became really important.

“I knew I had to be at my best to finish in front of these guys; so being able to walk away with the championship is extremely satisfying.

“I really do have to thank Skip Barber and Mazdaspeed for providing me with this incredible opportunity.”
With his first open wheel championship under his belt, Gabin is now considering his options for the 2015 racing season.

A move up to the Mazda Road to Indy in the USF2000 National Championship is top of the agenda, and Gabin is determined to ensure the journey doesn’t end at this step.

“The goal for 2015 is without doubt to be competing in USF2000. I have some testing coming up, in addition to the Skip Barber shootout, but creating and developing business partnerships will also be crucial to my career progression.

“I am confident I will be on the ladder next year, and looking at what I achieved over the past 12 months, it gives me confidence for the future.”

So, this young Australian came to North America with nothing more than a bag and his racing gear.

Now, he has some trophies and a promising looking future in North America. For young Luke Gabin, it may be time to start looking for an apartment, some furniture and a roommate.

His North American adventure is only just beginning.