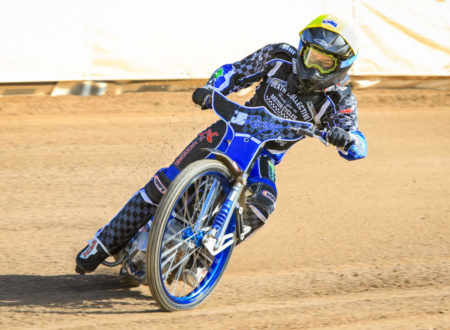 Australian Speedway fans continue to be spoilt by the pipeline of stars that come out of the nation of green and gold, star riders that spend much of their life overseas plying their skills professionally amongst all of Europe’s big speedway leagues and events.

Another rider is well on his way to such levels, and with thanks to the Federation of International Motorcycling and Discovery Sports Events creating a second and third tier to the iconic Speedway Grand Prix series, Ashley Jansen-Batchelor has his sights set on working his way up the ladder and into the SGP limelight in the near future, starting in SGP3.

Speedway Grand Prix 3 being promoted as SGP3 will have its first world championship event with competitors up to the age of sixteen competing on 250cc machines.

The opportunity for many will be the first time they gain the experience of a big-time event, and they will do so at the famous Wroclaw track in Poland this August and fourteen-year-old South Australian Jansen-Batchelor will be there for the semi-finals beginning on the 25th.

Jansen-Batchelor will head to Poland having developed his own riding skills further during the 21/22 Australian season achieving the thrill of a podium at a national championship.

Having finished in third place in the latest under 16 125cc Australian Solo Speedway Championship which proved to be Ashley’s favourite meeting of the season having come into the event with limited experience in 125cc racing then finishing second in the Best Pairs Australian Championship, he has gained a tremendous amount of confidence in his ability.

In preparation for Poland Jansen-Batchelor has been competing in the Mildura winter series and will leave Australia with valuable track time and tremendous family / team support.

Ashley looks forward to soaking in the atmosphere of the world’s main stage in Poland before returning to Australia to focus on the 250cc Australian Championship in November and then work towards heading to Europe after the Australian season in 2023.

Ashley has long term goals in place to be a team’s racer in Europe in the best leagues such as England, Sweden, Poland, and to represent Australia at every opportunity.

“I really enjoy the adrenalin rush I get from being a racer,” Jansen-Batchelor said.

“I get the opportunity to make great friends and the honour of representing others such as clubs, states, teams and in the future, Australia.

“I get to do this with family members and there is no greater thrill than sharing the joy of success with those closest to you.”

The cost of competing in international sport for most people, begins by sacrificing so much from within financially.

Australia has produced so many of the worlds best riders and this proves true right now after the Australian team won their first ever Speedway of Nations championship with our team of Max Fricke, Jason Doyle, and Jack Holder.

Ashley races in South Australia and Victoria and wherever the big events take the family which includes his father Scott, his mother Jill Jansen, his Uncle Rod, and others.

Jansen-Batchelor would like to thank the following supportive businesses.

“I have an amazing group of sponsors that I am proud to have supporting me.

“I am so thankful for everything they do to support my racing.

“We could not do all of this without them.”