Australian setting the pace in F1600 with Exclusive Autosport

Australian setting the pace in F1600 with Exclusive Autosport 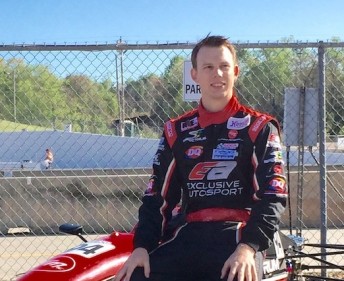 The Exclusive Autosport racer reached the podium in all three races including an impressive rookie victory in just his second start in the series.

The 24-year-old from Torquay, Victoria, holds the championship points lead heading into this weekend’s second round at the legendary Watkins Glen Circuit in New York, 15th-17th May.

Having made such an impressive start to his 2015 campaign, where he pilots the #94 Exclusive Autosport / Exclusive Management Inc. / Helmart / Automobility PTY Ltd / Spectrum / Sparco / Honda Racing HPD entry, Scott took time out from his race preparations to download his thoughts on the season, Australian racing, his career highlights and living in Las Vegas – his home for the season!

Q: We have to start with your impressive debut at Road Atlanta in the F1600 Formula F Championship Series last month. Did you expect to be so competitive straight away?

Scott Andrews (SA): “Thank you! I knew that I was getting into a competitive team with a competitive chassis in Spectrum. Having driven these types of cars back home for a long time I was confident we would be battling for podiums in this series. To win though was a great feeling and a well deserved victory for the team.”

Q: You’re now leading the championship heading into the next round at Watkins Glen. Does that bring any added pressure or does it give you the confidence to focus on going for the championship?

SA: “I think it’s too early in the championship to think about that yet. I think the guys have realized who are serious championship contenders already and we just have to keep pushing and bringing home strong results.”

Q: You’re an Australian racing in the US with an Australian built chassis. Do you think people underestimate the strengths of the racing scene back home and how satisfying is it for you to be delivering wins racing a Spectrum internationally?

SA: “It’s a very cool opportunity and I hope that it could bring more Australian’s into this series. I think people are definitely starting to realize how strong the drivers are back home in Australia. More often than not when an Aussie goes overseas he or she is very competitive.”

Q: What specifically made you want to head to the US to compete in F1600?

SA: “For me it’s a good way to learn more US tracks and potentially meet people who could heavily influence my career. It’s a good training ground for that kind of stuff.”

Q: What is your long-term goal in racing? Are you looking to remain in open-wheel and set your sights on the likes of IndyCar racing or would racing sports cars professionally appeal?

SA: “My long term goal is to keep chipping away at American racing. I’d like not to close any doors, as none have been fully opened just yet.”

Q: You’ve chosen to base yourself in Las Vegas for the season. What appealed to you about that location and what do you get up to in your spare time there?

SA: “Before I moved over to the US full-time I realized I needed to work over here to be able to pay for rent and living costs. Two big things attracted me to Vegas. Firstly, the cost of living over her is cheap and secondly, the work opportunities here seemed like the best I was offered having sent numerous emails.

“With my athlete visa I’m only allowed to earn money from something that is directly in line with my profession, which is why I’m a driver coach out at the Las Vegas Motor Speedway at Exotics Racing.”

Q: Is the Australian racing community a close-knit one? Do you keep in touch with other drivers from back home competing in the US etc?

SA: “I think like anywhere you try and support your friends who are taking the leap and trying to make it work overseas.”

Q: What are your career highlights? You’ve been successful racing at the likes of the legendary Bathurst Circuit in Australia – where do those victories rank?

SA: “So far enjoying success at the Bathurst 12 Hour in the F1600 class this year is definitely up there. Some karting wins back in the day were pretty cool too. Getting a podium finish in my second ever round of the highly competitive Australian Formula Ford series at Phillip Island was a great feeling also. My biggest career highlights are yet to come! I really hope to make some great memories this year in F1600!”

Q: You’re now firmly part of the Exclusive Autosport line-up alongside veteran racers such as Jack Mitchell Jr and Thomas McGregor. What’s the relationship like with the other drivers and how much detail do you share together at the track?

SA: “Thomas and Jack are both very experienced Formula 1600 drivers, both having won championships in this class. It’s nice to have teammates who can get the most out of a car so we can keep pushing forward. A lot of the detail we share at the track is about race strategy, using the draft effectively and figuring out what corners to pass on that lose us the least amount of time. Our engineering team holds no secrets and we all look at each other’s data and onboard footage. We share our thoughts about how we think we could go faster!”

Q: Finally, imagine you can race any car from any series on any track in the world. What would your choices be and why?