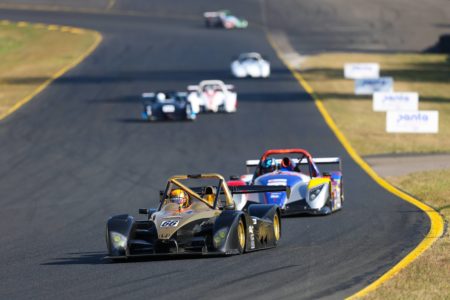 The Australian Prototype Series begins its season this weekend with 15 drivers confirmed for the first round at Sydney Motorsport Park as part of the Production Car Nationals.

The entry list makes for interesting reading with the regular stars to line up at Eastern Creek along with a mixture of a new faces and drivers making their grand return to the category.

Headlining the field will be some familiar faces in 2017 champion Mark Laucke, 2018 champion Jason Makris and Series contender John Paul Drake – all of whom will be driving Wolfs.

Joining the three behind the wheel of a Wolf will be Hankook Cup Winner Glen Stallbaum and debutant Marty Ewer, who has made the switch from the Michelin Cup Challenge Australia.

After missing last year’s final round at The Bend Motorsport Park, Paul Trengove returns to the series in the hopes of building on a number of impressive performances last year, which included a runner-up and a fourth place.

Trengove will be one of three drivers steering the West WR1000, with second-year driver Philip Andrawos and rookie Michael Naguib also lining up in Wests.

There will be a healthy rivalry in the Radical Class with seven drivers confirmed for the season opener, including Radical Cup superstar Peter Paddon. After sitting on the sidelines in 2019, Paddon recently announced plans to contest every Prototype Series round in 2020.

Paddon’s biggest threat will come from reigning Radical Australia Cup Champion Chris Perini and the returning Stephen Champion – who last raced in the series back in 2018 at Sydney Motorsport Park.

Australian Prototype Series regulars Philip Hughes and Sue Hughes will be looking for a strong start in 2020, while Nicholas Ashwin and Jonathon Canavan will be racing in the series for the first time – taking the total number of debutants to four.

With reigning outright champion David Barram out for the year and 2019 Radical class winner Carmelo Bonaventura not attending the opening round, the series opens up for some new title contenders in 2020.

The 15 drivers will have a number of opportunities over the course of the opening weekend to state their case for a title bid with a race to take place on both Saturday and Sunday.

Drivers will get to test out their cars during Friday’s three practice sessions, before qualifying on Saturday morning sets up the 25-minute race on Saturday afternoon. The category will then finish up with a 35-minute rolling start race on Sunday morning.

Fans unable to attend Sydney Motorsport Park can tune into every race of the weekend via the Australian Production Cars Series Facebook page here.