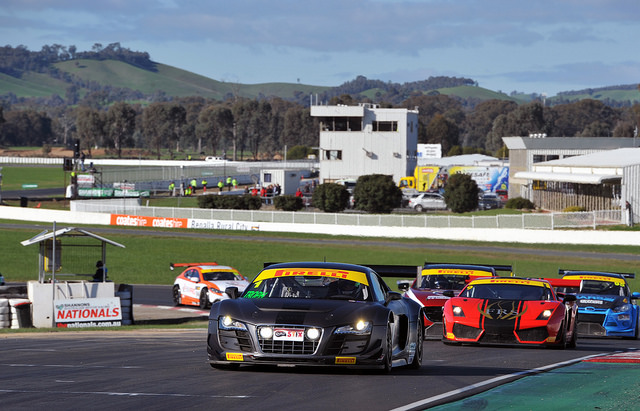 MEDIA RELEASE: Australian GT races into New South Wales for the first time in 2016 as the third round of the CAMS Australian GT Trophy Series presented by Pirelli heads to Sydney Motorsport Park this weekend.

Wins for Greg Taylor and Jake Camilleri last time out at Winton Motor Raceway saw both men extend their championship leads in the Trophy and MARC Classes in a dramatic weekend of racing.

Both men are set to renew the Audi versus MARC Car battle around the 4.5-kilometre Sydney Motorsport Park circuit.

It’s a venue that perfectly suits sports car racing, with the long front straight, sweeping turns and two big braking points on each lap there is a section of track that favours every car in the field.

Strong pace at Winton for Mathew Turnbull didn’t net the returns the Fire Rating Solutions driver had hoped for.

However after displaying clear pace at both Sandown and Winton the Lamborghini Gallardo will remain a challenge and will once again be able to stretch its legs down the long front straight.

Mensa claimed Trophy Class honours in the dramatic second race at Winton last time out, and third overall after holding the top spot for long periods.

The Porsche ranks will be further swelled by the addition of Stephen Grove and Richard Gartner in GT3 Cup Cars, while the consistent Brendan Cook and Ockert Fourie will defend their Challenge Class points advantage.

Keen to make up for missing the last event at Winton, Jan Jinadasa returns with his Lamborghini Gallardo, one of two entries from the Italian marque and one of only two non-German entries in the Trophy Class.

The Italian challenge is bolstered once again by Scott Hookey in the Ferrari 458 Challenge.

The Queenslander will be looking to repeat his efforts from the opening round of the season which saw him dominate the Challenge Class across both races at Sandown.

A string of solid performances have left Rob Smith second in the Trophy Class points standings as the Southern Star Developments pilot looks to continue his fine run and take the championship battle to Greg Taylor in the sister Audi R8 LMS.

Joining Camilleri is an fleet of entries from MARC Cars Australia, which promises a staggering six car attack.

Smith and Rowe proved they’ve got the fire power needed to race at the front last time out while Taunton’s outing at Sandown at the start of the year showed he too is a man to watch.

Kassulke will make his second Australian GT appearance of the season having raced in the opening round of the CAMS Australian Endurance Championship, the Phillip Island 101.

The veteran racer showed he’s lost none of his speed while Adrian Deitz swaps the Ferrari 458 he races in the CAMS Australian GT Championship for a MARC Focus V8.

Reaching its halfway point this weekend, the CAMS Australian GT Trophy Series presented by Pirelli will take in opening practice on Friday afternoon before second practice and qualifying on Saturday.

Both races will be streamed live online and can be watched via the Australian GT website.