The Australian F1 and F2 Sidecar Championship round 2 Morgan Park

The Australian F1 and F2 Sidecar Championship round 2 Morgan Park 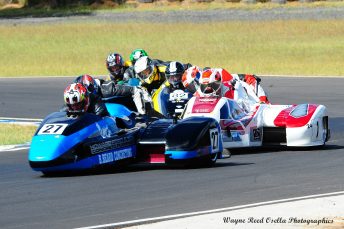 The Masters of Morgan Park meeting provided the event and the venue for the second round of the Australian F1 and F2 Sidecar Championship. With fantastic support from local Queensland teams the numbers were much more than at round one despite the departure of two teams who had been at round one to the Isle of Man. The freshly resurfaced track meant many were hoping to beat their personal best times and possibly the lap record.

After the surprise pace of the championship leaders at round 1 at Winton only two weeks before, it was as favourites that Howard Ford/Lee Menzies (Howard Ford Concrete Pumping LCR Suzuki) went into round two. Like the first round they would forgo the practice day, but still put their machine on pole, beside local favourites Dave Boughen/Lok O’Kane (SideFX Racing LCR Suzuki). The second row was headed by reigning champions Jero Joyce/Corey Blackman (Rick Hanger Racing RHR Kawasaki) beside the father – son team of Richard and Scott Goodale (Shelbourne Honda) who were also first F2.

The F2 class was to suffer two teams dropping out early with Matty McKinnon/Warren Grubb (Matty’s Spoke Wheels PC Suzuki) having to withdraw before qualifying due to a major electrical problem and Richard and Scott Goodale pulling in on the sighting lap of race one with a collapsed rear wheel bearing. With their spare being the wrong part they were out for the weekend.

Race one was started first thing Sunday morning after some delays on Saturday saw it postponed, and it was Ford/Menzies who took the win with Boughen/O’Kane five seconds adrift. Joyce/Blackman despite posting the fastest lap of the race dropped to third after their engine went into limp home mode finishing a further eighteen seconds behind. Fourth was Daniel Keppell/Matty Morgan (McCabe Suzuki) who showed good pace despite Matty Morgan having had a tumble at turn three in the first practice session. The first F2 was Western Australians Darryl McLeod/Paul Matthews (McLeod Suzuki) in ninth outright with Andrew Phillips/Barry Martin (Shelbourne Honda) second in F2 but 15th outright despite being a few laps down.

Due to further delays race two was shortened from ten laps to eight and the top three were very close until lap seven, when Joyce/Blackman had a moment exiting turn six leaving Ford/Menzies nowhere to go but off the track, re-joining behind Boughen/O’Kane but losing around nine seconds. Joyce/Blackman again set the fastest lap but this time also took the race win 0.4 seconds ahead of Boughen/O’Kane with Ford/Menzies nine seconds back in third. Fourth was again Daniel Keppell/Matty Morgan who fought off a late race attack from Jeff Brown/Darren Sheldrick (APW Motorcycles JBR Suzuki). First of the F2s was again McLeod/Matthews but this time only 0.11 ahead of Phillips/Martin with Joseph and Ted Tuppen(Shelbourne Honda) in third, twenty seconds behind them.

The second race had seen some rubbing and some bumping but nothing like the last race, the most action packed race of possibly any category for the meeting. The same top three had their usual swapping of places, changing the lead up to six times per lap with paint and carbon fibre given a real stress test as the track became narrower and the dicing became more desperate. Late in the race the F2 of Joseph and Ted Tuppen had an incident, leaving the passenger tumbling in the turn six gravel trap and the passengerless machine stuck on the exit of turn seven. This caused a long yellow flag zone that was to come into play later. After six laps Jero Joyce decided the heat at the front was too much and settled for a safe third, leaving Ford and Boughen to battle it out to the finish. After more lead changes and getting tantalisingly close to the Paul Jacobs/Steve Bonney lap record, coincidentally set on the Ford/Menzies machine, it was Ford and Menzies who were first to the chequered flag, but then upon entering pit lane it was announced that they had been relegated to second place for passing under yellow flags, handing the win to Boughen and O’Kane. Joyce and Blackman finished third only four seconds behind with Brown/Sheldrick fourth after a mistake in turn three by Keppell/Morgan.

First in F2 was the team of Andrew Phillips and Barry Martin in what is believed to be the first class win in Australian sidecar racing by a paraplegic rider in his first meeting since converting his Shelbourne Honda to hand controls. Second was Darryl McLeod/Paul Matthews nursing the machine to the finish stuck in fifth gear.

The next round of the championship is at Sydney Motorsport Park with the ASBK on 8-10 September. Being Howard Ford’s home track he will definitely be going in as favourite despite the fact that both Boughen and Joyce have better personal best times at that track, so it should be action packed once again. Also the top F2 teams will be back from the IoM as well as some fast local teams it is not to be missed.

F1 points after round two:

F2 points after round two: