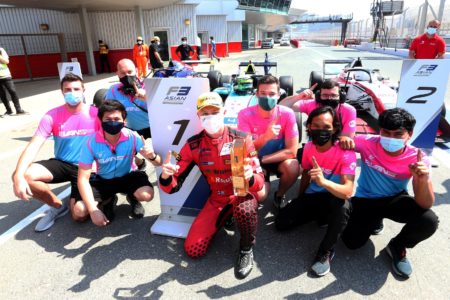 Yesterday was the exciting conclusion of Round 4 of the 2021 Asian F3 Championship, which had returned to Dubai Autodrome February 10th -15th. With 21 driver entries from 15 nations and featuring some of the top race teams in the world, the Australian-owned, Sepang-based Evans GP team took itself into the record books with its first F3 win, amongst the other achievements of its drivers Patrik Pasma, Alex Connor, and Irina Sidorkova.

TEST SESSIONS – February 10th & 11th
In Wednesday morning’s opening test session for Round 4, Evans GP Team OLOI’s Patrik Pasma took P4 while British F4 racer Alex Connor managed 12th in his very first session in Asian F3, and Irina Sidorkova P19 on her return to the track after having to sit out Round 3 with a hand injury from race six. In the afternoon’s Test Session Two, Pasma took a solid P4 just off F1 test driver Guanyu Zhou.

QUALIFYING – February 12th
Due to morning fog, the scheduled Official Practice was delayed and then cancelled due to time constraints with the busy race weekend schedule which featured the Asian Le Mans Series, FIA F4 UAE Championship and Gulf Radical Cup. However, qualifying was able to go ahead with cleared weather by noon in hazy but comfortable 23C conditions.

In Qualifying One, Patrik Pasma took P7, Alex Connor P12 in his first Asian F3 qualifying and just six hundredths off F2 racer Roy Nissany of Hitech GP, while Irina Sidorkova took P18, for the start grid of Race One of Round 4.

After the ten minute break, in the Qualifying Two session Pasma took a solid P4, with Connor and Sidorkova P15 & P19 for the start grid of Race Three of Round 4.

RACE ONE – February 12th
On the race start under clear skies at 3:45pm Fri Dubai time, Pasma flew up the field in the first lap from his P7 starting position, all the way into P3. The Finn took it all the way to the end to finish 3rd for his first podium in Asian F3, spending the race closing on F1 Test Driver Guanyu Zhou’s gearbox in his OLOI, Inc Tatuus T-318. Pasma also set second fastest race lap to earn a front row start for Race Two. However, unfortunately later in the day Pasma’s 3rd place was dropped to 4th after he was penalized for gaining a place outside track limits during the race start melee. But, as he set the second fastest race lap, he was able to start just off pole for Race Two on Saturday.

RACE TWO – February 13th
On the race start at 11am Saturday morning, with Pasma starting P2 in the OLOI car, the Finn once again got off to a strong start but not quite able to pass Kush Maini for P1 in the first lap. However, immediately after a safety car period, Pasma made a brilliant pass on Maini to take the lead, and took it all the way to the checkered flag to give Evans GP its first Asian F3 victory, and the first win of the season for the OLOI, Inc car. On his way to the finish line, Pasma also once again set the second fastest lap of the race.

Not to be outdone by his teammate, F3 rookie Alex Connor went all the way from a P13 start to finish 6th, and also finished 2nd in the Asian F3R Rookie category.

Irina Sidorkova managed to go all the way up from a P19 start to finish P14 despite Amna AL Qubaisi making contact with the Russian driver.

At the start, Pasma immediately jumped into P3 and held on to take yet another podium for 3Y Evans GP Team OLOI in the shortened safety car race, at times closing in on Prema driver David Vidales for P2 but not quite able to pass during the shortened race.

Meanwhile Connor and Sidorkova reached as high as P10 and P15, and in the end finished P13 and P17, with improvement from their starting positions.

After achieving its first F3 win and more podiums, Australian-owned, Sepang based Evans GP looks to continue its stellar performance as the season heads to its gripping finale this coming week. The championship will move back to the famous Yas Marina F1 Circuit in Abu Dhabi for its exciting conclusion at Round 5, the final race weekend of the 2021 Asian F3 series. The Evans GP team goes into the final round with a strong 3rd in the Team standings, and with Isack Hadjar still 4th in Driver points and Patrik Pasma moving up to 6th overall in the Driver standings.

OLOI is a San Francisco-based motorsports-inspired line of apparel which focuses on blending performance with time-proven classics in its product line. For more information on OLOI, please visit their website.