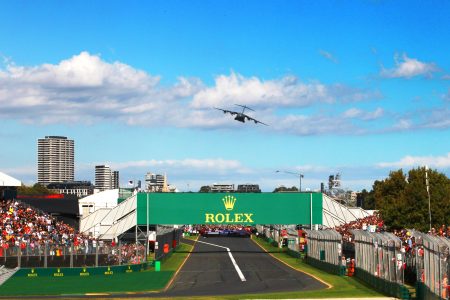 The four-day international motorsport spectacle provides a wonderful opportunity for the public to experience the Australian Defence Force, both in the air and on the ground as they enjoy the year’s ultimate racing and entertainment extravaganza.

The Air Force will delight fans at the Formula 1® Rolex Australian Grand Prix 2019 with a number of high-speed aerial displays showcasing the technical capabilities and precision flying of the F/A-18A Classic Hornet on both Saturday 16 and Sunday 17 March, while on the main race day, a C-17A Globemaster will also make its presence known with an impressive low altitude flypast. Navy will also showcase the abilities of the MH-60R helicopter, with a dynamic aerial display.

“AGPC is most appreciative of the support of the Defence Force and it is great to have the continuation of such a strong relationship. We look forward to delivering a thrilling show for fans.”

C-17 pilot Flight Lieutenant Caitlin Rytenskild from 36 Squadron, based at Amberley in south-east Queensland, is enthusiastic about her role.

“It’s great to participate in the Formula 1® Australian Grand Prix – it is an amazing experience for the crowds and it gives us an opportunity to showcase our aircraft,” she said.

F/A-18 pilot Flight Lieutenant Michael Keightley from RAAF Base Williamtown said he was looking forward to flying on the day.

“Our aircraft are highly capable and performing these displays demonstrates their exceptional manoeuvrability while also giving us valuable training,” he said.

The Australian Defence Force exhibit, located in the Innovation and Technology Hub,will feature a host of additional displays and experiences across the four days:

For tickets and for more information regarding the Formula 1® Rolex Australian Grand Prix 2019, please visit www.grandprix.com.au