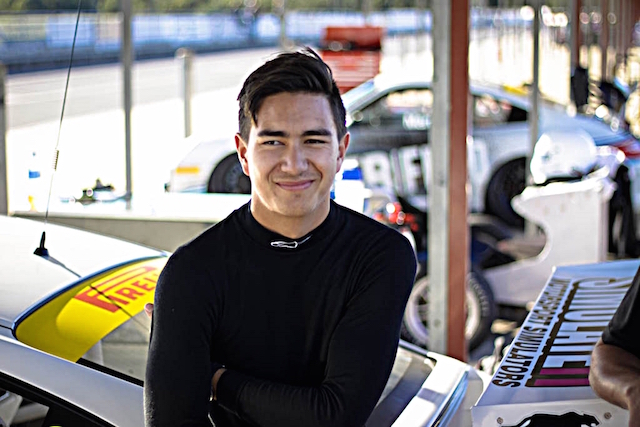 MEDIA RELEASE: Jaxon Evans, 19, is a third generation race driver who brings trans-Tasman competitiveness to the grid for the next four rounds of the Toyota Finance 86 Championship.

Evans, who lives on the Gold Coast in Australia, will contest the top category in the Australian Porsche GT3 Cup championship in 2016. He says with the Australian season not starting until April, the opportunity to get some racing miles in the TR 86 is a great way to start the 2016 race season.

The impetus to race in the 86 championship came from another icon of New Zealand motorsport – Kenny Smith, also currently racing in the series.

“We follow New Zealand motorsport and the Toyota Racing Series and after discussing with Kenny Smith we decided it wouldn’t be a bad idea to give it a go. We hope to be competitive alongside the season regulars, and have a good crack at some top results,” he said.

Evans is New Zealand-born and his lineage is all racer. His mum is Debbie Lester, one of the quickest female racers in New Zealand in the 1980s and ‘90s. Her father – and Jaxon’s grandfather – Robbie Lester is a three-times national Formula Vee champion and one of the founders of the Manfeild race circuit in the Manawatu.

Debbie Lester married John Evans from Ashburton – for many years a mechanic for Andy McElrea. McElrea is a multiple New Zealand Formula Ford champion who also raced the spectacular V8 TraNZam race cars before heading overseas to build a career in automotive and motorsport events and management. Andy McElrea is now managing Evans’ career through his company, McElrea Racing.

Through the Lester connection, Evans is also related to racer and team manager Richard Lester, and to racer Jono Lester, who has contested the Toyota Racing Series and is now heavily involved in international endurance racing.

Like many – if not most – rising race drivers, Evans started his racing career in karting and competed in a range of kart categories including the Australian Rotax Protour and the New Zealand Pro-Kart series, where he finished second to Daniel Bray in KZ2 last year.

He scored a number of race wins and podium finishes over a five year karting career before stepping up into sports and touring car categories. He already has a string of Porsche and production sports car race wins to his name.

Rounding out his 2015 season with second in class B in the Porsche Australia GT3 Cup Challenge, Evans says he is looking to hone his race-craft in the coming four rounds of the New Zealand championship and then step up to a drive in the Australian Porsche series in a class A car. He will ‘commute’ across for each of the coming four rounds of the series. Longer term, Evans has his sights set on racing success in Asia and Europe.

The winner of the 2015-2016 Toyota Finance 86 Championship takes the championship title and a sponsored drive at Bathurst 2016 in Australia’s own Pro-Am series for the award-winning 86 sports coupe. The Bathurst drive offers racers a fast road to international recognition.