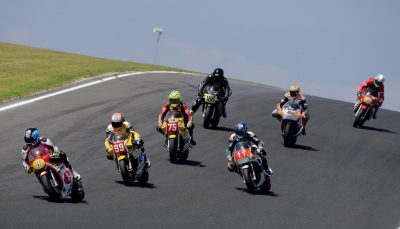 With two of the four races complete in the cut-throat event, Australia is just 6pts in front of the UK (341 to 335), while the much-improved America is third on 288pts ahead of fourth-placed New Zealand on 174pts.

Australia, desperate to snap the UK’s three-year hold on the MV Agusta International Challenge, was best served by David Johnson (Suzuki) on day one, with the South Australian polesitter finishing second and first in the two six-lap races.

“It feels awesome,” said Johnson. “In the first race we had a few problems with tyre pressures and the back end of the bike, but we fixed it in the second one and I was able to lap a lot more consistently.

“I knew a few spots where I was quicker than Jeremy in race two, and I had to try and capitalise on that. On the penultimate lap I looked behind and saw a train of English riders and thought ‘shit!’, so I knew I had to cover my lines and also stay with Jeremy.

“So I busted my arse to stay with him and then I got him at Honda (turn four), which was my plan the whole time.

“I tried to block pass him and he tried to cut back and lost the back end. That gave me a bit of a gap but I was still covering like mad until the end of the race.”

McWilliams’ last lap mistake also allowed Richards to sneak into second place, but the Northern Irishman was at least able to maintain his 100 per cent finishing record in the International Challenge that dates back to 2011.

Meanwhile, Australia’s star signing Troy Corser (Honda) was sixth in both races on his spare bike that was considerably down on power to the other front-runners.

In race one, Australia’s Paul Byrne (Suzuki) was fifth ahead of Corser, Linfoot, Zemke, the UK’s Peter Hickman (Honda) and Martin.

Kids 15 and under FREE, accompanied by a paying adult
Sunday at gate – adult $65