Austin fractions away from outright BTCC podium at Croft

Austin fractions away from outright BTCC podium at Croft 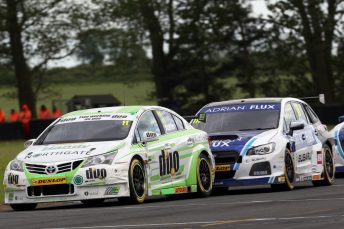 Rob Austin produced a sensational drive, under intense pressure, during round 15 of the Dunlop MSA British Touring Car Championship at Croft on Sunday, 11th June, to just miss out on Handy Motorsport’s second outright podium of the year by the slimmest of margins – just 0.041 seconds.

After a fantastic battle with double BTCC Champion Jason Plato during the second half of race three of the weekend, Evesham driver Austin looked to have just done enough to keep his rival at bay and secure third place. On the sprint to the chequered flag, though, the superior turbo boost of Plato’s Subaru Levorg told and he was able to steal the final spot on the outright podium by fractions.

Even so, fourth place for Austin in his front-wheel drive Toyota Avensis marked a terrific result at a track most suited to rear-wheel drive cars and he also finished in second place in the Independents Trophy battle.

Earlier in the day Austin finished 11th in round 13, having started an unrepresentative 17th on the grid due to a red flag shortened qualifying session following a nasty multi-car incident, and in round 14 he was an improved eighth – second again in the Independents battle. Notably, Austin has closed to within just three points of the Independents championship lead.

“I would dearly have loved to get on that podium and reward the boys and everyone but, in the end, he [Plato] out-boosted me!”, said Austin, “To be fair, Jason drove really well and the nice thing about racing with him is you know he’s not going to try and fire you off the circuit and you can have a really strategic, hard-but-fair battle with him. So although I lost out, I really enjoyed the challenge.

“In the wet in free practice we had a really good car, and left a bit on the table as well, so we looked forward to qualifying but it didn’t go our way. After everything that happened in qualifying though, we were just happy to have a car in one piece but a shame not to have a representative grid slot. “

He added: “The first race on the hard tyres was really tricky but 11th on hard tyres, from 17th, I was really happy with that. We picked up a couple of positions in race two on medium tyres, and then finally had some luck with the reverse grid for race three – we often seem to miss that luck.”

Rain was prevalent throughout day one at Croft on Saturday, 10th June, making for miserable conditions during both practice sessions and qualifying, but Austin looked strong in the wet weather and lapped inside the top four in session one before another trouble-free run in session two.

During qualifying though, just nine minutes into the run, a huge multi-car incident – triggered after oil was deposited on the track at Barcroft – resulted in the session being red flagged. Due to the length of time of the clear-up process, extrication of injured drivers from their damaged cars and the difficulties clearing the oil from the wet track surface, officials decided to call time on the session.

Austin, therefore, had to start race one from 17th on the grid, having not set a truly representative time during the first eight minutes of the truncated qualifying session, and he climbed into the top 15 on a very busy opening lap.

Running the hard compound ‘option’ tyres for the opening contest, the Handy driver made good progress to move into 13th place but did sustain some damage to the left-rear of his Toyota and slipped to 14th on lap seven.

Moving back up a place again on lap 10, he was then elbowed back to 14th once more before profiting from a pit-stop for James Cole’s Subaru. Closing onto the tail of Jake Hill, into the final tour Austin was able to edge alongside and duly grabbed 12th position. Post-race, he was elevated into 11th when Ollie Jackson received a penalty.

Back on the prime Dunlop tyres for round 14, Austin started the race at the head of row six and moved up into the top 10 into the complex after a spin for Tom Ingram. At the end of lap four, a stop-go penalty for Josh Cook lifted Austin into ninth as the pack behind fourth placed Gordon Shedden closed up significantly and then, on lap six, he moved into the top eight.

Under pressure into the final few laps, Austin also closed onto the tail of the seventh placed Ford Focus but no more changes were forthcoming as the Handy Motorsport racer took his best result of the weekend to that point with eighth.

Rewarded with second on the partially reversed grid for round 15 during the grid draw, Austin slipped to third off the start and after an early Safety Car period he was able to move back into second place when Ollie Jackson and Mat Jackson made contact.

Under immense pressure from Plato, the Handy driver soon had some breathing space when Ashley Sutton began to challenge his Subaru team-mate but after passing Plato he zeroed in on Austin and managed to get ahead at the beginning of lap nine. Plato then became Austin’s antagonist once more but he defended third position supremely well, despite the Subaru’s greater turbo boost.

Into the final lap, Austin had 0.7 seconds in hand over Plato and the podium looked a realistic prospect but on the run out of the hairpin for the last time the Subaru motored alongside and just stole third by the blink of an eye.

Reflecting on race three, team principal Simon Belcher said: “It was very nerve racking but Rob did a sterling job holding everyone off. Croft is a rear-wheel drive circuit, we came here knowing that and I think we did a really solid job this weekend. Some of the cars, through the regulations, have got a bit more boost than we have but hopefully that’ll be rectified during the summer break.”

There is now a seven-week summer sojourn in the BTCC calendar with the second half of the 2017 season set to begin over the weekend 29th/30th July at Snetterton 300 Circuit in Norfolk.