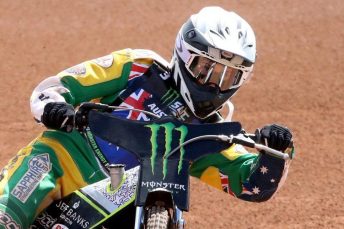 Round One of three for the EKO-DIR FIM Speedway U-21 World Speedway Championship got off to a full throttle start in Poznań, Poland over the weekend and saw three strong Australian placements in the Championship and an Aussie set record!

Round one started with an hour long delay after earlier rain hampered track conditions, with the opening heats an all Polish affair.

Heat 5 saw Kacper Woryna (Poland) and Robert Lambert (UK) fall in first corner. Video replay showed that Woryna was at fault and was excluded. Dimitri Berge (France) had a lot of bad luck, with two failures on the start. Similarly, Alexander Woentin’s (Sweden) performance was lacklustre, as the Swede couldn’t get it together on the long track in Poznań. He fell in heat 6, his bike journeyed infield, resulting in a race stop.

In heat 13, Woryna was implicated in another situation where the Pol had some problems and fell in the first corner of second lap. Fortunately, the fall wasn’t as bad as it seemed and the air fences saved him from serious injury.

The first semi-final was close to culminating in a huge accident when Andreas Lyager (Denmark), riding third, hit Jack Holder (Australia). Fortunately, the toughened Aussie remained on his bike. The Dane hadn’t much luck, a broken collarbone ending his campaign.

The Final of competition was Drabik’s show, who won his semi-final and final. Furthermore, he scored full 21 points. Bartosz Smektała (Poland) placed second, while third place was taken by Latvian Kostygov.

Fricke is tied on second place points heading into next round. Jack Holder in sixth and Brady Kurtz battled through with injured ribs finishing in ninth.