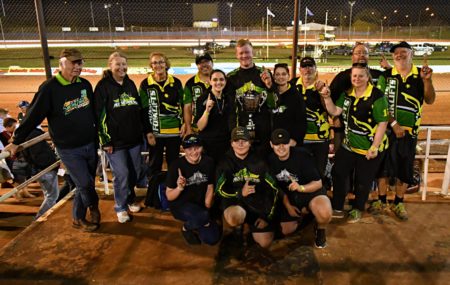 The 2019-20 season may have been cut short for the Aussie Racing team, but that did not stop them from enjoying a big season across both the Wingless Sprint and 410 Sprintcar classes.

When it comes to the season highlights for the Aussie Racing team, Ashleigh Jack picked up the point standings win in the hotly contested NSW Wingless Sprint Club Championship, while Jack’s team-mate, Daniel Sayre, recorded his maiden 410 Sprintcar feature-race win.

Jack enjoyed a consistent season in the Wingless Sprint class, and she was rewarded with the top honours in the NSW Club Championship point standings. Jack created history by becoming the first female racer in Australian speedway to claim a club championship in a major class. Apart from her Wingless Sprint activities, she stepped into 410 Sprintcars for the first time and ran a total of five race meetings at Sydney’s Valvoline Raceway.

“To win the NSW Club Championship is a massive honour and the key to this win was without a doubt my consistency,” commented Jack, whose best finish during the season was a fourth-place finish at her home track along with her fair share of other top-10 finishes.

“It’s been a quite busy season for the whole team, as I also made my first steps into Sprintcar racing, which was a massive thrill and something that was a whole new experience.

“Looking ahead to next season, I’ll be doing a bit more Sprintcar racing and contesting most of the major Wingless Sprints events in NSW, and one of my goals is to continue to learn with the Sprintcar and also try and get my first Wingless Sprint feature-race win at Valvoline Raceway before it closes.”

In what was the best possible start to the what was his sixth season in 410 Sprintcars, Sayre drove outstandingly to claim his first feature-race victory at Valvoline Raceway. From there, Sayre and the team were consistent without being brilliant by qualifying directly into every feature-race at their home track – Valvoline Raceway. Running a brand-new Maxim this season, he finished what turned out to the last appearance of the season on a high by narrowly missing out on the podium in fourth after he had started from the back of the field.

“To win my first Sprintcar feature race was a dream come true for me and also one of the team’s highlights for the season,” expressed Sayre, who finished sixth in the final Ultimate Sprintcar Championship NSW point standings.

“Although we were consistent during the season by qualifying directly into every feature race at Valvoline Raceway, we struggled to get a grip of the new car’s setup when the track would go slick but we managed to get on top of it towards the end of the season.

“All in all, I look back on the season as one where we improved our consistency and I’m now looking forward to the new season getting underway and hopefully we can build on this season’s performances.”

In other Aussie Racing team news, Daniel’s younger brother, Luke, endured a mixed season in Wingless Sprints and also dabbled in 410 Sprintcars driving for veteran car owner Dennis Farr. The third Sayre sibling, Andrew, enjoyed a pleasing debut season in Wingless Sprints, where he managed to finish on the podium in third at Valvoline Raceway in his final appearance of the season and he was also one of the leading rookies throughout the season.

Special Thanks: Leon and Alana Jack, Jeremy and Stacey Sayre, and Doug Ware.