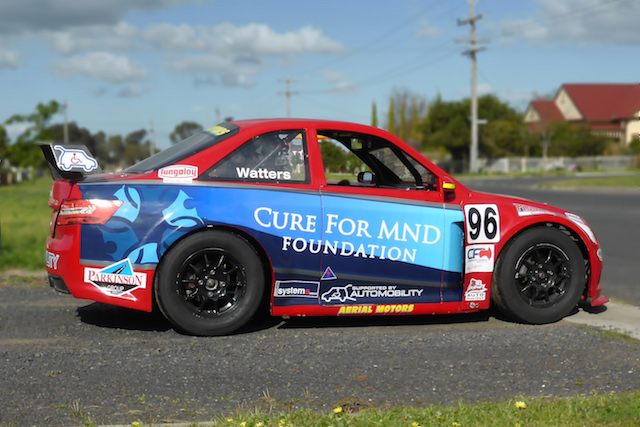 MEDIA RELEASE: The Pocket Rocket Aussie Racing Cars are set to rock the Mountain next weekend with 45 cars on the grid.

“We are not racing for sheep stations but the guys and girls in our class fight hard for position on the track, when they come back to the pits there’s jokes and laughs about who dove down the inside or who went 3 wide over skyline, its great it’s a real family fun atmosphere” says Brad Ward the Category Manager.

“Recently I was made aware of a very serious side to life, one of our drivers Jeff Watters from Melbourne rung me about an insidious disease call Motor Neurone Disease or MND that’s effecting some of his family friends. Jeff wanted to help find a cure and raise the awareness of the disease and so he’s joined with the Cure MND Foundation and has had his Nissan Altima rebranded” said Ward.

The Aussie Racing Cars have decided to make the Cure for MND Foundation the official charity for the Class with an aim to help raise the profile of MND and the effect it has not only on the sufferer but the family and friends around the patient.

“There is no cure, there is no effective treatment.  MND sufferer’s bodies just start shutting down until they die. I had met several clients with MND over the years but recently 2 family friends had been diagnosed with MND and it was then that MND really got my attention – especially when my friend Bruce recently passed away from his MND,” Watters said.

The number 96 Advantage Motorsport, Automobility Aussie Racing Car had been rebranded as the #96 Cure for MND Foundation Aussie Racing Car, it will feature in a number of photo shoots at the mountain with key members of MND, the Aussie Racing Car Family and other notable V8Supercar drivers over the course of the Bathurst event.

Foundation and MND sufferers to help them get out and about and enjoy the time they have left before MND takes over and their body shuts down.

The #96 Cure for MND Foundation race team will have Cure MND team shirts and will be talking to competitors and fans at race meetings to encourage donations to the Cure for MND and raise awareness of this insidious disease.

A donation of $10 will get fans an “I donated to the Cure for MND Foundation” sticker that will help raise awareness and money for the Foundation.

“We are very happy to help raise awareness for the Foundation over the course of the Bathurst race weekend and beyond, through our racing, our teams and our media. It’s a great cause, it’s a horrible disease, I hope we can help make a difference”, commented Ward.