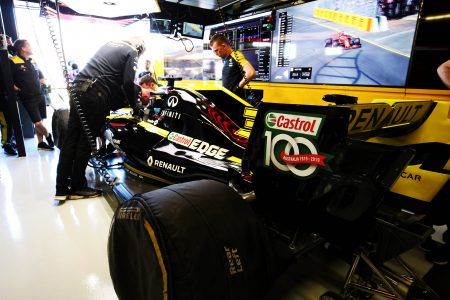 The Renault F1® Team challenger, the R.S.19, features a large 100 years celebration logo on the rear wing which has qualified 11th and 12th for today’s race.

It was Ricciardo’s first taste of a Supercar, put on by team sponsor, Castrol.

Castrol Australia has been making oil since 1919 and globally oiling the wheels of the industry since the inception of the motorcar.

With a blend of castor oil and a single-minded vision, Castrol revolutionised the transport industry to become the world’s leading lubricants brand.

Established on the 1st July 1919, Castrol Australia celebrates its founder, Charles Wakefield and the company’s proud heritage of innovation and pioneering achievements.

Epic achievers bearing the Castrol name include Amy Johnson, the first woman to fly solo in a De Havilland Gypsy Moth from England to Australia in 1930; Amelia Earhart, Jim Mollison, and Alcock and Brown who all used Castrol piston oils for their pioneering flights

Castrol Australia has a strong motorsport heritage as the most winning oil at the iconic Bathurst circuit at Mount Panorama. King of the Mountain, Peter Brock, took his eight of nine Bathurst wins on Castrol lubricant.

Castrol has been behind some of the biggest names in Australian motorsport, backing Victor Bray and Ben in drag racing as well as touring car champions Larry Perkins, Tony Longhurst, Jim Richards, Steve Richards, Russell Ingall, Greg Murphy and Rick Kelly to name a few. Castrol also supported Speedway legend Garry Rush over a successful long period, in addition to a range of victorious campaigns in motorcycling, off road and much more.

Castrol will celebrate the 100 year milestone throughout a number of media activities and wish all TeamCastrol drivers and teams a safe and successful season.