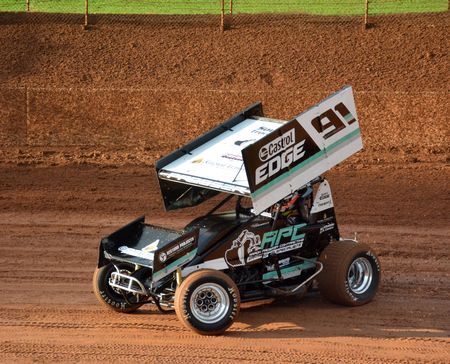 Boxing Day has long been one of the biggest days on the annual speedway calendar and 2021 is certainly no exception, with Archerfield Speedway leading the way in delivering a massive night of motorsport entertainment on Sunday night (December 26) featuring Sprintcars , Monster Trucks, Fireworks and a huge support program. Round seven of the East Coast Logistics Sprintcar Track Championship has attracted the strongest field of the season, in both quality and quantity, with current Australian champ Jamie Veal heading north to take on series front runners Lachlan McHugh and Luke Oldfield. Round four of the TFH Midget Series will also be decided, along with racing action courtesy of Wingless Sprints, Modlites and Lightning Sprints, with more than 110 competitors to hit the track.

As the only driver to break the McHugh/Oldfield stranglehold on track championship feature race victories so far this season, Tasmania’s Jock Goodyer returns this weekend which, along with the inclusion of Veal in the field, adds a very exciting element to proceedings as the local duo face a very tough fight to maintain their domination of the results. More than 30 other drivers will take to the track for the first night in a packed schedule that will see Sprintcars appear at Archerfield six times in two weeks, culminating in the $10 000-to-win Titan Garages Australian Open over two nights on January 7 and 8. With only three drivers having visited victory lane so far this season, there is literally no better time for somebody else to step up and announce themselves as a threat in the big races to come. Defending series champ McHugh has scored three ECL feature race wins and Oldfield has been victorious on two occasions, with both drivers having finished on the podium on six occasions. However, with McHugh crashing out early in round three, it is Oldfield who currently sits atop the championship standings by a 16-point margin, but with nine rounds remaining, there are a plethora of possible permutations that could potentially play out as the championship progresses.

In the absence of Cody Maroske, who is the only other driver to finish on the podium on more than one occasion this season, it is former track champ Aaron Kelly who is perhaps the best bet from the rest of the field to find his way to victory lane. After enduring a few setbacks in the opening weeks of the season, Kelly has been in strong form over the last few rounds and he currently sits fourth overall in the championship, just four points behind Maroske. Others currently occupying a position amongst the top ten in the championship chase are Adam Butler, Tim Farrell, Brent Kratzmann, Ryan McNamara, Karl Hoffmans and Mitch Gowland, all of whom are amongst the entries for Sunday night. Of this group, only Farrell has featured on the podium at any stage, with Taylor Prosser and Robbie Farr the only others to secure a top-three result. Prosser will be one of several young guns in the field seeking to enhance his reputation in the toughest of speedway disciplines, with the likes of Ryan Newton, Nicholas Whell and Randy Morgan having also shown plenty to suggest that there might be big things to come, and maybe now is the time for them to step up and steal the spotlight.

In comparison to the scarcity of front runners in the Sprintcar ranks, the racing amongst the Midget fraternity has featured numerous drivers in contention in all three rounds of the TFH Series, with each feature race having been won by a different driver. Charlie Brown ran the ragged edge up against the fence to win the opening round, Jayden Peacock prevailed in round two and then it was expat Kiwi Michael Kendall who added some more silverware to his already bulging trophy cabinet with victory in round three. The Midgets have been sensational so far this season and the level of competition has been of such intensity that the likes of Darren Vine and Brock Dean are yet to find their way to the podium. In fact, Brown and Kendall are the only drivers to have done so on two occasions, with Scott Farmer, Rusty Whittaker, Rob Stewart and Casey O’Connell all having secured a top-three feature race result. With the likes of Brad Dawson, Cal Whatmore, Scott Doyle and Dylan Menz amongst those yet to secure a place on a TFH feature race podium this season, the scene is set for another dazzling display from the mighty Midgets.

As expected, the opening of the QLD/NSW border has brought an immediate influx of Wingless Sprint drivers, with six interstaters bolstering the field for round nine of the Queensland Club Championship, presented by Robertson Building Services. Whilst Rob Mazzer has been unstoppable in recent weeks, this Sunday looms as his biggest challenge yet with Dubbo-based veteran Mark Blyton leading the interstate challenge. Blyton brings a wealth of experience into the mix and, with a very good record of success in Brisbane, he looms as the biggest obstacle in Mazzer’s bid for three consecutive feature race wins at Archerfield. Look for Liam Atkinson, Lachlan Robertson, Ben Manson and Jayden O’Toole to also appear prominently in pursuit of a place on the podium.

A solid 20-car field has been assembled for the opening night of racing in the Universal Home Improvements/Pro 1 Race Parts Modlite Christmas Cup and the line-up includes current national champ Sam Gollschewsky and two former titleholders in Terry Leerentveld and Klinton Hancey. On this occasion, the trio might find that their biggest threat comes from further afield than usual, with the Mackay-based duo of Jason and Brodie Boss joining the fray. Brodie, in particular, has proven a dynamo in several race divisions and carries a big reputation into this showdown with the doyens of the category.

Thankfully, with several category regulars opting to miss this weekend, the return of former national champ Kurt Wilson and the addition of a couple of interstate visitors has come at just the right time, ensuring a 12-car field will hit the track for the latest round of the Lightning Sprint Club Championship.
Gates open at 2.30pm for online ticketholders and general admission ticket sales are from 4.00pm, with early racing at 4.30pm. The main program, featuring Australian champion Jamie Veal in round seven of the East Coast Logistics Sprintcar Track Championship, along with two Monster Trucks and Fireworks, will launch from 6.00pm.