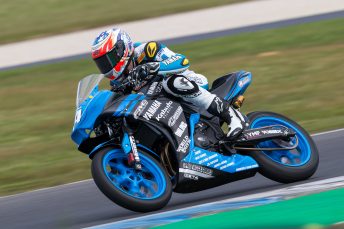 Young star, Broc Pearson has secured a ride in the Asia Road Racing Championship (ARRC) for the final round of the season, at the Chang International Circuit in Thailand. It’s great news for the young Australian who has plenty of experience competing in Asia and the Yamaha Motor Finance Australian Superbike Championship presented by Motul Pirelli (ASBK).

Pearson spent both 2015 and 2016 in the Asia Dream Cup and secured a couple pole positions, regular front row starts, podiums and a race win. Pearson’s return to the ASBK for 2017 did not go as smoothly as he would have liked, with injuries taking him out of title contention after a training accident back in February. Pearson managed to return halfway through the season and scored positive results to secure himself a wildcard ride in the ARRC.

Pearson sharing; “About a month ago at the final round of ASBK down at Phillip Island, I completed a race for the Hi-Tec Batteries Supersport 300 class, when the promoters for the ARRC were in attendance. Because I knew them from previous years overseas, I had a discussion with them and they asked; “when am I coming back to compete in Asia?” I was honest with them and said I would love to compete there but I didn’t have a ride at that time. They then offered to have a look into whether they could hook me up with a spot.

“A few weeks later, I managed to secure a ride in the RAMA Honda Team, as they had a CBR600RR bike available. This team is backed directly from Japan and were willing to offer me the bike, if I was up for the challenge. I didn’t need to think twice about being able to compete overseas. We will be racing at the Chang International Circuit in Thailand and I’ve had the pleasure of racing there before, when I picked up my first win in the Asia Dream Cup.

“I have always admired the level of the ARRC and the guys there are incredibly fast. Their racers actually manage to post similar lap times to the World Supersport guys in the 1:37’s and they don’t even have the same level of equipment. It’s going to be tough against these riders, but I will be aiming to score points. It’s will actually be my first time racing a Supersport machine as well, so I will have to adapt quickly. I’m hoping to get some testing in, before I head off overseas.

“The team have told me that if I perform well enough, there could be a chance that I could race with them for the 2018 season. I think I can adapt well and the 600cc bike might suit my taller frame. Hopefully I can score points, but it’s hard to set goals at the moment. I just need to keep training and aim high!

“I had an accident earlier in the year, when I was training for ASBK Round 1 and I heavily injured myself. It took a long time to recover and it was disappointing, as my goal all along was to contend for the 2017 championship, for me there was no other alternative in my mind. To sustain injuries before the season started was devastating. I have to be realistic though, as I sat out six months off the bike and I can’t expect to just go out there and win. For me, it’s all about next year now. To pick up this ride in the ARRC has given me newfound confidence and it provides an opportunity to train for next season.

“The level of talent in the Hi-Tec Batteries Supersport 300 class was unbelievable this year and it’s great that its being recognised overseas. The lap times have dropped by about three or four seconds this year and the racing has been fierce. Riders like Billy Van Eerde, Tommy Edwards, Reid Battye and Tayla Relph have all secured wildcard rides overseas lately. I think riders in the ASBK have got what it takes to compete in Spain and Asia, as the pace is so fast here in Australia at the moment.” Pearson finished.