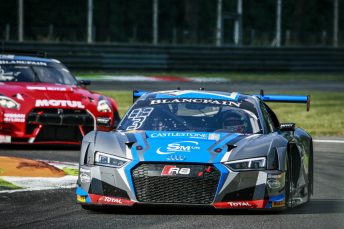 Spa-Francorchamps in Belgium, one of the most iconic and storied motorsport venues in the world, will host the biggest test of Josh Caygill’s car racing career next weekend, 29th/30th July, when the Yorkshire driver makes his maiden appearance in the prestigious Total 24 Hours of Spa.

Marking the fourth event of the Blancpain Endurance Cup season, the annual twice-round-the-clock encounter will undoubtedly be the most challenging, but also the most exciting, of the 27-year-old’s five-year career in four wheeled racing.

Netherton-based Caygill, who made the switch to cars in 2013 after a highly successful tenure in motorcycling in categories such as the Triumph Triple Challenge, British Superstock Championship and British Supersport Championship, heads to Spa next week relishing the prospect of tackling the Ardennes track in the No.3 Audi R8 LMS.

Due to the increased duration of the Total 24 Hours of Spa, compared to any other race on the 2017 calendar, the line-up of the Belgian Audi Club Team WRT entry expands to four drivers. Caygill and regular team-mates Jon Venter and Niki Mayr-Melnhof will be joined by hugely successful British racer Richard Lyons, who ordinarily competes in the Super GT Championship in Japan.

“It goes without saying, I can’t wait for the 24 Hour – it’s going to be absolutely mega”, said Caygill, “Everyone in motorsport knows what a huge race this is to be part of, you’ve got some of the very best professional drivers in the world, the top teams, best manufacturers…it really is one of the biggest challenges in endurance racing anywhere.

“Obviously, I’m still learning every time I’m out in the Audi and this season is a massive learning curve but we’re making progress, I’m improving my driving and all the guys in the team are working well together. It’s good I have got experience of 24 Hour races in the past, but this is a whole new level and I’m under no illusions. It’s going to be a huge challenge but I really can’t wait for it to start.”

He added: “Having Richard [Lyons] with us is going to be fantastic, he’s got a huge amount of experience at a very high level so that can only benefit Jon, Niki and myself. Hopefully we can have good reliability, be consistent and be there at the finish, that’s the first target for any 24 Hour race!”

Caygill heads to Spa with an increasing level of confidence in the realms of the globe’s biggest and best GT racing championship, particularly after a season-best showing during the six-hour race at Paul Ricard last month.

Impressing during his two-hour double-stint during the ‘into the night race’, the Briton – partnered by regular team-mate Venter and Hugo De Sadeleer, a stand-in for Mayr-Melnhof – raced to ninth position in the Pro-Am class.

The build-up to the Total 24 Hours of Spa actually begins on Tuesday, 25th July, with the opening Bronze Test ahead of the annual parade of race cars from the track to the nearby town centre of Spa on Wednesday, 26th July.