Audi ready to turn up the heat in Townsville

Audi ready to turn up the heat in Townsville 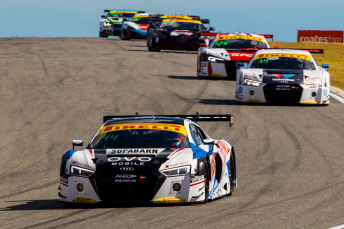 Audi Sport Customer Racing Australia is ready to turn up the heat as the CAMS Australian GT Championship heads to Townsville next weekend (July 7-9) for the penultimate round of the 2017 season.

With two cars in Championship contention, the hot, sunny streets of Reid Park will play a pivotal role for the 2017 crown.

Sitting just 74-points from the top of the table, James Koundouris and Ash Walsh head into the weekend determined to confirm their Championship credentials aboard the Supabarn Supermarkets Audi R8 LMS.

With seven starts in Townsville under his belt, Koundouris is one of the most experienced drivers on the grid at the challenging 2.85-kilometre street circuit.

While Walsh has experience around the streets of Reid Park, including victory in 2014 while racing in the Supercars Development Series, this will mark his Townsville debut behind the wheel of GT3 machinery.

Easing his task will be Koundouris, who boasts seven previous Australian GT starts at the circuit, making him one of the most experienced drivers heading into the weekend.

Also set to make his debut in Townsville is Kelvin van der Linde, who will once again share the driving duties with Geoff Emery in the #74 Vavoline Jamec Pem Racing Audi R8 LMS.

The duo has combined to record two race wins already in 2017, and have finished inside the top ten in the last seven consecutive races to sit second in the points classification.

Though he’s never driven the Reid Park circuit in an Audi, Emery has pedigree around at the venue having stood on the podium there in 2015 and remains one of his favourites on the calendar.

“It’s a circuit that will really suit the Audi, so I’m really excited about it,” enthused Emery.

“It’s a low grip surface, a street circuit, so it needs a car with lots of aerodynamic grip, which the Audi has.”

The Ah Apartments entry will again be entrusted to Ash Samadi, the GT racing veteran having recorded two top-five placings in four previous starts in Townsville.

They’re performances which fill the Sydney-sider with enthusiasm heading in, though he’s aware the heat will play its part in the popular street event.

“It’s always nice to head into the warmth from a drizzling, wintery Sydney,” Samadi reasoned.

“The heat will be a factor, but I don’t think it will be too much of an influence.

“The circuit isn’t as busy as Barbagallo, so there are a few places you can rest, but there’s a big bump on the back straight that can catch you out.”

Cini returns fresh from Europe, where he competed in the support events to the famed Le Mans 24-Hours.

The event will also mark Cini’s 12-month anniversary with Audi Sport Cutomer Racing Australia, after recording a fine 12th place in Race 2 in his first weekend back in Australian GT since 2012.

Those two sessions will set the grid for the first of three races across the remainder of the weekend, Race 1 on Saturday (July 8) afternoon and two on Sunday.

All sessions will be broadcast live on Fox Sports, Channel 506, with selected coverage also available live on free to air courtesy of Network Ten.