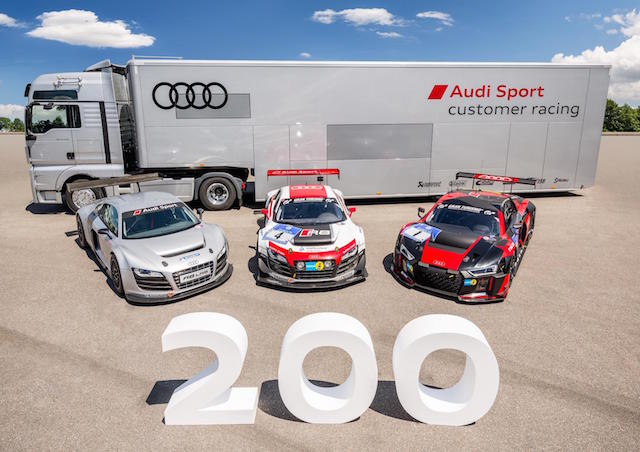 MEDIA RELEASE: The Audi Sport customer racing team has completed the 200th Audi R8 LMS. Since 2009, the brand with the four rings has been involved in international GT3 racing with a race car for customers and developed a sales and service network around the globe, numerous supporting services and technology offerings.

If all of the 200 Audi R8 LMS cars produced to date were lined up directly behind each other the line would be more than 900 meters long. 136 models of the first-generation race car and 64 of its successor launched in 2015 have been delivered by Audi around the world.

“We’re proud of this mark of 200 cars,” says Stephan Winkelmann, Managing Director of quattro GmbH that develops and produces the race car. “With more than ten manufacturers offering their products, including many premium sports car brands, the GT3 market is fiercely competitive in many countries.

The demand shows that both our product and our services are focused on the customer and absolutely competitive.” To date, both generations combined have won 28 overall championship titles worldwide. In addition, there are 34 class titles, nine overall victories in 24-hour races, plus four successes in 12-hour competitions.
Chris Reinke, Head of Audi Sport customer racing, says: “When our new model was launched last year, many teams opted for the Audi R8 LMS – and inquiries from many parts of the world continue to be received in large numbers. Our teams and drivers have been battling for victories and championship titles around the globe ever since the new race car’s first full season.”
The 200th Audi R8 LMS was built at the Neckarsulm site in July and goes to Team “Montaplast by Land-Motorsport.” Wolfgang Land’s squad, after six single events, is leading the ADAC GT Masters with Christopher Mies/Connor De Phillippi (D/USA). Not only teams in Germany and Europe benefit from the services and personal consultancy provided by Audi Sport customer racing.