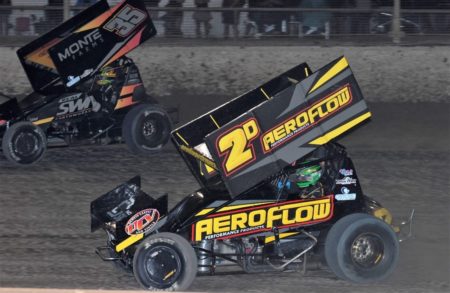 Ben Atkinson Junior achieved the biggest victory of his Sprintcar career at he Chariots of Thunder Series, held at Darwin’s Northline Speedway on Saturday

After showing plenty of speed aboard his # 2 D Aeroflow Performance / Rocket Industries / Darwin Carpets & Vinyls / Northern Skip Bins supported Triple X car throughout the Chariots of Thunder Series, which included some misfortune along the way, leading into last Saturday night’s fourth and final round, Atkinson Junior went to another level, and it saw him rewarded with a dominant win.

“It’s so hard, to sum up, last Saturday night’s win, as it’s quite a surreal feeling and well and truly still sinking in,” Atkinson Junior said.

“The Chariots of Thunder Series is the biggest event of our local season and it continues to attract a lot of the country’s best Sprintcar racers, so to add my name to the round winner’s list is something really special for not only me but my entire family.”

Atkinson Junior continued on by saying that everything fell into place for him and the team on Saturday night.

After starting from the second row of the feature race by virtue of finishing fourth in the pole shuffle, he quickly moved into second and then set his sights on leader and defending Chariots of Thunder Series Champion Matt Egel.

Showing his feature-race speed from the outset, Atkinson Jnr was able to chase down Egel and pass him for the lead on Lap 11.

Once out in front, he was never headed and went on to claim a sensational victory.

“My crew guys (Dad – Ben Snr, Dwayne and Lee) did a fantastic job with the car over the past fortnight, and it all came together for us on Saturday night,” said Atkinson Junior continued.

“In the pole shuffle, the team and I had a bit of a play around with the car’s setup and tried a few things, which didn’t work out, so we went back to our earlier setup, and it worked a treat, as my car was a rocket for the feature race.”

Regarded as one of the local favourites heading into this year’s Chariots of Thunder Series, Atkinson Junior certainly didn’t let his home crowd down.

“It was the best feeling to be able to jump up on the top of the car and do a wing dance, and to do it in front of a large, roaring local crowd made it even better,” he explained.

“There is always a little bit of pressure to do well in front of my home crowd, and to be honest, every time I hit the track, no matter where I am racing in the country, I want to represent the Territory the best way that I can.”

Following the news leading into the weekend’s action that the Atkinson team had announced that the partnership between them and long-time sponsor Aeroflow Performance was to conclude after the Chariots of Thunder Series, Atkinson Junior certainly finished their relationship in the best possible fashion.

“I couldn’t have asked for a better way to farewell Aeroflow Performance as a sponsor by winning the final Chariots of Thunder Series round,” he expressed.

“Graeme and Wendy Cowin from Aeroflow Performance have been supporters of our team for seven years now, and we can’t thank them enough for all of their wonderful support, and they will always be a part of our family.”

At the conclusion of the Chariots of Thunder Series, Atkinson Junior ended up eighth in the final point standings.

Looking towards the upcoming 2022-23 season down south, Atkinson Junior doesn’t have any plans set in concrete just yet, but he is hoping to base his racing program in Queensland at Toowoomba’s Hi-Tec Oils Speedway.