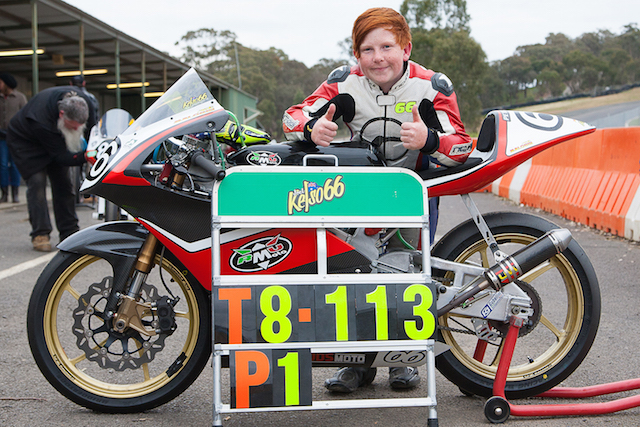 MEDIA RELEASE: Junior Motorcycle Road Racer Joel Kelso created history more than once last weekend by breaking the lap record at Broadford Circuit in Victoria and also becoming the youngest rider to be accepted into the Asia Talent Cup trials, to be held at the Malaysian MotoGP round in October.

12 year old Joel flew from Darwin to Melbourne for last weekends Pirelli Series and got straight to business, setting the pace all weekend on his 70cc road racing machine.

During race 4 on Sunday Joel went quicker than anyone before, smashing the lap record and winning his class.

While Joel was racing, his coach Mark McVeigh from the motoDNA Riders Academy, finalised a deal that will see Joel compete in trials for a place in the prestigious 2016 Asia Talent Cup championship.

The Asia Talent Cup is held literally on Darwin’s doorstep in South East Asia and is a fiercely competitive feeder class to World Championship MotoGP.

Joel commented, “ It’s been an awesome weekend. I am very happy and relieved to get the lap record on my RMU70 at Broadford and so excited to go to the Asia Talent Cup trials, it’s a dream come true.”

Joel’s coach Mark McVeigh said, “This is a great chance for Joel to show his talent. It’s a tough gig though with strong competition, high humidity, strange surroundings plus the trials are run on underbone motorcycles, which are very popular in Asia. However Joel has been training hard and is a very focused young man and he’s well conditioned to the high humidity in Darwin, which is not that far from Malaysia.”

Australia’s motoDNA is the only school in the southern hemisphere to be accredited with Dorna Sports and have been instrumental in lobbying Dorna to allow Australians to enter this years Asia Talent Cup and McVeigh is confident motoDNA’s strong relationship with Dorna can help secure an Australian round of the Asia Talent Cup down the track.