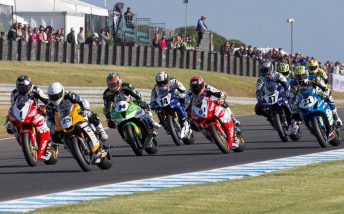 Excitement has never been higher within the Yamaha Motor Finance Australian Superbike Championship presented by Motul Pirelli (ASBK). With the top three riders in the Yamaha Motorcycle Insurance (YMI) Superbike class in such a close points battle, it could be anyone’s game when the red light goes out this weekend at Hidden Valley Raceway, July 7-9.

There have been plenty of thrilling races this season, however this weekend’s race at Hidden Valley Raceway is set to be an absolute corker. With the top three within nine points of each other, this weekend’s racing is absolutely crucial for a 2017 title bid. The riders will fight not only for wins, but for momentum in the championship.

This year the ASBK has been turned on its head with a privateer Yamaha rider, Daniel Falzon (JD Racing, Yamaha YZF-R1) leading the championship. Falzon is known as one of the ‘nice guy’s’ within the paddock and he certainly has impressed with his staunch work ethic and determination. After achieving a brilliant Round 1 clean sweep at Phillip Island Grand Prix Circuit (VIC), Falzon has been ticking away scoring points and maintaining consistency.

Can a privateer win the YMI Superbike Championship? That’s the question on everyone’s mind as Falzon has lead right up until the halfway mark of the season. If there was an upcoming talent that could achieve that goal, it could be Falzon. He will, however, certainly have to be wary of his two closest championship rivals in second and third positions.

Yamaha Racing Team’s Wayne ‘The Enforcer’ Maxwell (Yamaha YZF-R1) has to be considered the ‘in form’ rider, after taking both wins at the last round at Winton (VIC). The 2013 Australian Superbike Champion Maxwell looks to be at ‘one’ with his Yamaha YZF-R1 and the combination are proving to be a match made in heaven. Maxwell knows what it takes to win and with the Yamaha Racing Team focused on the title, they will be a force to be reckoned with.

All eyes will be on Crankt Protein Honda Racing’s Troy Herfoss (CBR1000SP2) to see how he adapts to the all new Honda CBR1000SP2 machine. There has been a lot of build-up to see whether this bike would in fact debut at Hidden Valley Raceway. Now that it has been confirmed, and the bike will be raced, it will be interesting to see whether this is the secret weapon in Honda’s grand plans to go for back to back ASBK titles. Herfoss is the very definition of a man that lives and breathes success. From his intricate training on his pushbike to his laser sharp mentality in pit lane, Herfoss won’t back down from this fight.

Who will prevail on Sunday? That is hard to say. With the ASBK paddock not having raced at Hidden Valley for several years, teams will have little data to rely on and it will likely even the playing field. One thing’s for sure, is that Falzon, Maxwell and Herfoss are likely to feature towards the pointy end and are all hopefuls for the final podium!