ASBK Teams up with Elite Roads for Pole Position Award

ASBK Teams up with Elite Roads for Pole Position Award 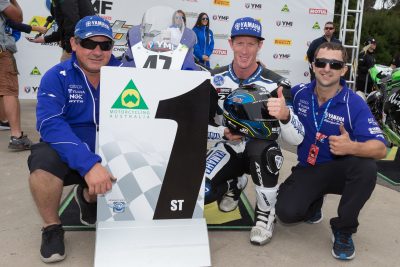 his season. The award will make its debut at Round 4 Hidden Valley Raceway (NT) when competitors will battle it out for the number one grid slot.

The rider who stops the clock with the fastest lap of qualifying and secures pole position in the YMI Superbike class will walk away with a cheque for $500 courtesy of Elite Roads, a nice addition to securing pole position.

Elite Roads is a full-service road construction company that specialises in civil contracting, road rehabilitation, profiling and the supply and lay of asphalt.

Deon Coote (Director of Elite Roads) is excited to be a part of the Elite Roads Superbike Pole Position Award; “The reason behind the sponsorship is to add further excitement to Qualifying. It’s been such an exciting and competitive start to the 2018 season and its thrilling to be a part of it. The competition is fierce and guys are pushing themselves to new levels, this small inventive might help raise the bar again!

“Elite Roads looks forward to grow with the ASBK for the remainder of 2018 and beyond,” Coote finished.

The battle for the very first Elite Roads Superbike Pole Position Award will take place up at the ‘Top End’ at Hidden Valley Raceway as Round 4 of ASBK takes over Darwin from June 28- July 1.

To find out more about Elite Roads, head to eliteroads.com.au.

Grab your tickets for Round 4 here and if you can’t make it to Darwin, don’t forget you can catch all the action live on SBS, Fox Sports and via the livestream at asbk.com.au and on ASBK’s Facebook.