ASBK ‘Superbike Masters’ to duke it out at Phillip Island

ASBK ‘Superbike Masters’ to duke it out at Phillip Island 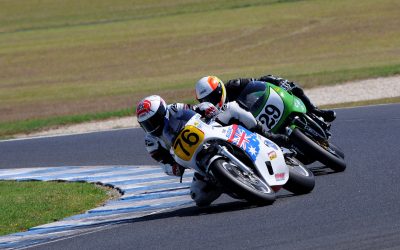 Historic racing will roar to life at the Spokes.com.au presents Round 7 of the Yamaha Motor Finance Australian Superbike Championship presented by Motul Pirelli (ASBK). ‘Superbike Masters’ will bring back the days gone by with bikes hailing from the 1970s, 1980s and 1990s.

ASBK has a proud history that has seen many of Australia’s greatest champions crowned on a wide variety of makes and machinery, which makes this new and iconic addition to Round 7 a proud moment in recognising the sport’s past alongside its present.

The ‘Superbike Masters’ offers a chance to celebrate the past with classic bikes being let loose in their ideal environment. Concept supporter and competitor, Darren Lark, is thrilled by the inclusion of the historic bikes, recognising that these icons will help new and current ASBK fans get behind the sport at the home of Australian motorcycle racing.

“The most important part of including the ‘Superbike Masters’ in Round 7 of ASBK is that older generations get to see the bikes from their youth and it can remind of when they were teenagers. Younger generations then get the pleasure of seeing how bikes operated back in the 1980’s and 1990’s and understand the growth of the sport over the past decades.

“Having the honour of joining ASBK at the Phillip Island Grand Prix Circuit will be special as it’s arguably the greatest motorcycle track in the world. It’s wide, it’s flowing and it’s very easy. This track also allows our riders to battle it out in the front, the middle and the back, so spectators get a great show from start to finish,” stated Lark.

For those making to the trek to Phillip Island Grand Prix Circuit, come along and see Bernie Leen on his immaculate Honda RC 30, Craig Stewart on the delectable Yamaha OW01 FZR 750, and Steve Kairl and Arron Morris on the very fast CM prepared FZR 1000’s.

There will also be four Yamaha TZ750’s on the grid, taking you back to a time when 4 cylinder 2 stokes ruled the racing world! The ‘Superbike Masters’ will be on track on from Friday 12th October to Sunday 14th October and race times can be found here. The historic competitors will duke it out in three races, whilst showing off their classic machinery.

Come along and say hello to the friendliest racers in the country, have a sit on the bikes and take your photos, Superbike Masters guys are always up for a chat.

You can also catch the racing Live on SBS and Fox Sports on Sunday October 14 from 1pm-3:30pm AEDT or via the asbk.com.au Livestream all day long.

Stay up to date with all the latest news and updates from ASBK by liking ASBK on Facebook, following the @asbk on Instagram and checking out the ASBK website here. To purchase your tickets for ASBK head to asbk.com.au.