ASBK set to heat up under the Darwin sun

ASBK set to heat up under the Darwin sun 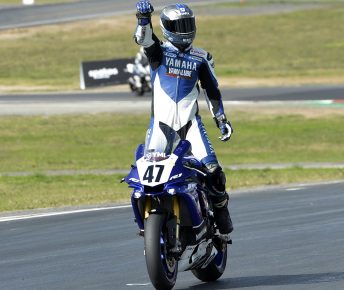 The Yamaha Motor Finance Australian Superbike Championship presented by Motul Pirelli (ASBK) is ready to ignite Darwin when it returns for the first time in years to Hidden Valley Raceway. Not only will the on-track action be electric, the ASBK will broadcast straight to fan’s TV screens and devices, live! With the racing weekend fast approaching next week, here’s what to look out for…

ASBK fans have delved deep into the championship with TV coverage being broadcast at every race so far in 2017. From heart stopping racing, to pit lane access and in-depth interviews with the riders and teams; it’s all there to be seen when ASBK goes live on Sunday. Can’t make it to the track? Then make sure you tune-in to channel SBS at 2:30 PM AEST or Live Stream via asbk.com.au from 10:30 AM AEST. There’s simply too much on the line this round to miss a second of the action.

Darwin’s Hidden Valley Raceway is an absolute rider favourite and crowd pleaser. Boasting a uber-long straight, intricate corner sequences topped with tropical weather, the lap records are sure to tumble across the classes! Aside from the on-track racing action, there’s plenty for race fans to look out for.

From the Dave McKenna Yamaha MT-09 Stunt Show, the ASBK Trade Alley featuring the massive bLU cRU Yamaha truck, VIP helicopter rides and the Mini Moto which is free for kids to try, it will be a weekend to remember!

There are a myriad of stories to keep track of as Round 4 rapidly approaches; with Yamaha Racing Team’s Glenn Allerton’s (Yamaha YZF-R1) long awaited return after breaking his arm back at Wakefield Park Raceway (NSW) at Round 2. It will be fascinating to see how the former Australian Superbike Champion fares on his return as he remounts his trusted Yamaha Superbike around the circuit.

ASBK will be treated to Crankt Protein Honda Racing Team debuting the brand new CBR1000SP2 in Darwin and there is much anticipation to see how the new bike will perform and whether it can provide reigning champion Troy Herfoss (Honda CBR1000SP2) the competitive edge in the 2017 title hunt.

Another story to keep track of is young Troy Guenther (NextGen Motorsports, BMW S1000RR), as he recovers from a racing incident last weekend. Team Manager, Wayne Hepburn is hopeful that the Superbike Rookie will be able to compete, if he’s up to the task.

To better cope with the Darwin heat (as the rest of Australia shivers through the winter), riders have been training hard over the ‘unofficial winter break’ to better perform and endure the high temperatures of the ‘Top End’. The race weekend will be a test of fitness and could play into the hands of those who have put in the hard work.

As it stands, the Yamaha Motorcycle Insurance Superbike (YMI) class is caught in a tight championship scrap, with Daniel Falzon (JD Racing Team, Yamaha YZF-R1), Wayne Maxwell (Yamaha Racing Team, YZF-R1) and Herfoss all separated by only nine points! With so much to play for, collecting wins at Hidden Valley will be critical.

The Motul Supersport class has been thrown a curveball with young gun Ted Collins (NextGen Motorsports, Suzuki GSX-R600) taking the title-fight to the highly touted Mark Chiodo (Repsol Gas Racing, Triumph 675R). The Hi-Tec Batteries Supersport 300 class is delivering a massive field of riders with too many up and coming stars of the future to count; such as young guns Reid Battye (DB Racing, Kawasaki EX 300) and Oli Bayliss (Cube Racing, Kawasaki EX 300). This round includes the Moto 3 and Motorsports NT Club Challenge who feature for the first time this year on the ASBK calendar.