ASBK returns to Winton in 2016

ASBK returns to Winton in 2016 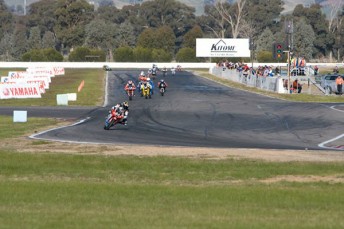 Motorcycling Australia (MA) today made the announcement that the North East Victorian venue will once again form a key part of the National Championship calendar after a multi-year absence.

Motorcycling Australia’s National Technical Director, Peter Doyle said that heading back to Winton Motor Raceway was the ideal way to build on the successes of 2015.

“MA is committed to the expansion of this pivotal Championship and the inclusion of Winton on the calendar is an exciting development in the continued evolution of the series,” Doyle said of the announcement.

“Winton Motor Raceway has a long history with this Championship and a return to Winton will be a return to the good old days with events at the Benalla venue always attracting a passionate crowd and a lot of local support.”

Winton Motor Raceway CEO Wayne Williams welcomes the return of the ASBK to the venue.

“Winton is very pleased to work with MA in seeing the return of Australian Superbike Championship to our venue,” he said.

“Winton Motor Raceway continues to develop and play its role as one of Australia’s premiere motor racing circuits and has been the home to exciting racing on both two and four wheels for many years.

“We are working hard to secure many major motor racing events in the 2016 calendar and it is our pleasure to add the Superbikes to our schedule.”

Winton is the second venue confirmed for the Championship in 2016, an addition to the announcement that Morgan Park Raceway Queensland would again host a round of the ASBK next year.